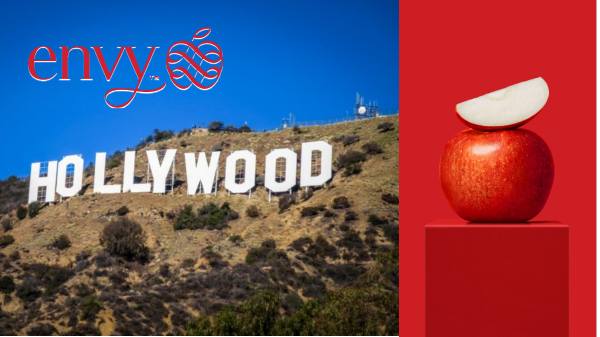 A recent episode of “The Late Late Show with James Corden” on CBS-TV kicked off with host Corden noticing head writer and frequent banter partner Ian Karmel munching on an apple just off the stage.

Distracted by seeing him eat, Corden asks Karmel why he decided to bite into an apple just as they were starting their live show. Karmel responds that it’s an Envy apple, and he’s eating it to calm his nerves, plus he was hungry.

“It’s a good-a%# apple,” Karmel says between bites. “You ever had an Envy apple?”

Corden laughs, “This is the third time in the last month you’ve said to me, ‘have you ever had an Envy apple?’”

Karmel responds, “There are a lot of lousy apples out there, but [Envy] is in my opinion the king of the apples. You’re my friend and I want to make sure you know about it.”

Meanwhile, over on daytime TV, “Jeopardy,” which garners over 7 million viewers daily, featured Envy as one of the most valuable clues in an episode. The $800 clue in the “Nosh” category, which host Mayim Bialik read aloud, was: “A quick and healthy nosh could be an Envy or the really cool-named Northern Spy, types of this fruit.”

Envy likely holds the distinction of being the only apple to serve as a clue on two trivia shows in the same week – as Envy was also featured in a UK trivia show called “The Chase.” In a rapid-fire challenge to answer as many clues as possible in under 2 minutes, the contestant answered correctly when asked: “Envy is a New Zealand variety of what fruit?”

“We’ve been so excited, and enjoyed a few good laughs, watching Envy earn such widespread pop culture coverage in recent days,” said Cecilia Flores Paez, T&G Global BB #:163999 head of marketing for North America. “It’s also very validating. Envy is an apple with a lot of momentum in the marketplace, and as we see its global appeal continue to grow it has been affirming to see Envy pop up into so many cultural conversations.”

Our story began over 125 years ago as Turners and Growers, and today T&G Global helps grow healthier futures for people around the world. Located in 13 countries, our team of 2,000 people both grow and partner with over 1,200 growers to market, sell and distribute nutritious fresh produce to customers and consumers in over 60 countries. As kaitiaki, we do this guided by kaitiakitanga. For us, this means we treat the land, people, produce, resources, and community with the greatest of respect and care, as guardians of their future. www.tandg.global

Envy is a registered trademark owned by the T&G group of companies. Developed in New Zealand and was patented in 2009. Envy is grown under license by T&G in selected prime apple growing regions across the globe, including New Zealand, North America, South Africa, Australia, and Europe. Envy apples have become an international success story with global demand, sold and distributed in over 60 countries. Learn more at https://envyapple.com/en/.