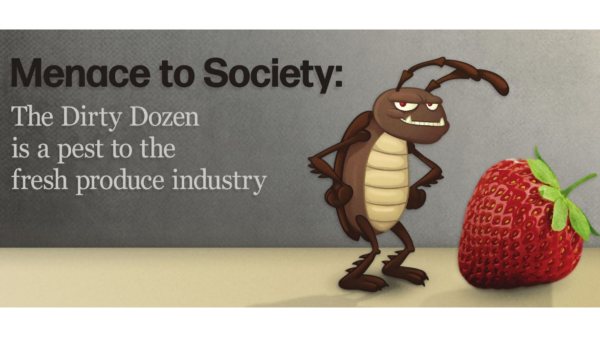 Teresa Thorne, executive director of the Alliance for Food and Farming (AFF) says that the Dirty Dozen is pernicious.

“This list has been shown to have a negative impact on consumers,” she says. “One peer-reviewed study [published in Nutrition Today in September 2016] found that when low-income consumers were exposed to ‘dirty dozen’ list messaging, they stated they were less likely to purchase any produce—organic or conventionally grown.

“With the Centers for Disease Control recent report showing only one in ten of us eats enough produce each day, to continually release a list that may discourage consumption of fruits and vegetables by promoting inaccurate safety fears is stunning.”

Nutritionist Elizabeth Shaw points out, “I do not think the unwarranted fear that lists like the Dirty Dozen elicit in individuals at all comes close to reflecting the true benefit of consuming produce in all forms.

“We’re in an era now where 13 million American children live in food insecure households. With more families struggling to feed their families nourishing meals, it seems counterproductive that lists like the Dirty Dozen continue to surface.

“This list, and those like it, cause more confusion for a family already struggling to put any food on the table. Produce consumption without question needs to be increased across the board,” Shaw contends.

But, she adds, “Consumers, especially those considered low-income, are tired of weeding through the mixed messaging that the media portrays when lists like this come out. Instead of choosing the berries, spinach, raisins, or other delicious, nutritious, and affordable fruit or veggies, they may opt for something less nutritious because they’re not sure what is ‘right’ or ‘healthy’ anymore.”

Fighting back
Nevertheless, AFF’s Thorne observes that the Dirty Dozen list “has much less impact than it did over a decade ago when the AFF launched its Safe Fruits and Veggies campaign.

“When we started,” Thorne says, “the list received widespread and enviable one-sided media attention. Today, mainstream coverage has declined significantly with very few major media outlets now covering the list and, if they do, most now include balancing information provided by the AFF.

As for the general public, a Gallup poll reported in U.S. News & World Report in November 2021 indicated that environmental concerns were at a 20-year low. They focused on waterway pollution, toxic waste contamination of air and water, air pollution, and global warming. Pesticide residues in food did not appear on the list.