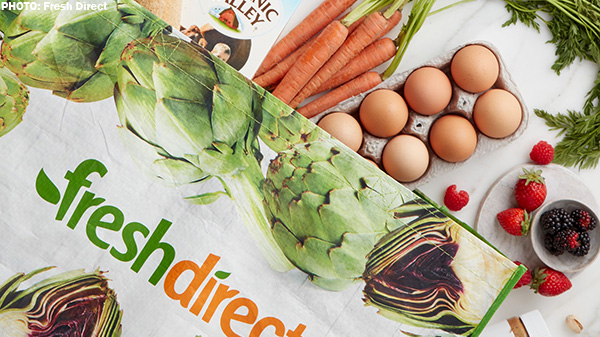 The rapid increase in demand for online grocery and the boom in home cooking are squarely aligned with what our team of food experts have been seeing firsthand, both early last year and later accelerated by the pandemic,” said Scott Crawford, Chief Merchandising Officer, FreshDirect.

BRONX, N.Y.–(BUSINESS WIRE)–FreshDirect BB #:164151, the online grocery shopping pioneer and one of the leading grocery delivery services in the U.S., is celebrating 20 years of innovation, excellence, and convenience. Since its founding in 2002, the Bronx-based online grocer has remained a signature household staple for two decades and has established true connections with its loyal customers.

FreshDirect delivers the highest quality, best tasting food directly to the doors of online grocery shoppers throughout the Northeast and distinguishes itself through direct and exclusive relationships with local farmers and suppliers.

To commemorate this extraordinary milestone, FreshDirect will be acknowledging the communities and the customers it serves, as well as the dedicated FreshDirect employees, with various celebratory events and promotions leading up to July 11, the day the company opened for business.

“While we are proud to have played an integral role in the defining moments of the online grocery industry over the last 20 years, we are exceptionally proud of bringing families together to create memorable moments over great food,” said Dave Bass, Managing Director, FreshDirect. “We are extremely grateful to our loyal customers, dedicated employees, and supportive community members for their contributions to FreshDirect’s evolution and growth, and we look forward to the next 20 years as we continue to deliver extraordinary quality, value and ease to New York City and beyond.”

Starting June 22, FreshDirect will show appreciation to its valued customers with a “20 Days of Giveaways” promotion on the website along with an Anniversary Sweepstakes, where one lucky customer will win free groceries for a year. In addition, the company will be offering “Anniversary Savings” promotions all summer long.

To celebrate and recognize the efforts of its dedicated workforce, FreshDirect will be hosting a 20th Anniversary celebration for all employees and their families. In addition, there will be a “20 Days of Giveaways” promotion for employees, offering a wide variety of prizes. Long-term employees will be highlighted in a social media “Employee Spotlight” campaign to acknowledge their commitment and dedication to the FreshDirect organization.

FreshDirect is an official sponsor of the Bronx Night Market, the borough’s famous, diverse and vibrant food and culture festival located in Fordham Plaza, and Harlem’s Uptown Night Market, the leading NYC foodie festival known for its support of the local micro-business community, hosting more than 8,000 people during the monthly events. The company will also be sponsoring the Alexander Avenue Summer Block Party.

Giving back and supporting neighbors is an important part of FreshDirect’s mission. The company partners with many local organizations in order to make a positive impact and is committed to addressing food insecurity. Throughout the summer, FreshDirect employees will commit to donating one day per month to support and volunteer on-site at New York Common Pantry, one of FreshDirect’s charitable partners since February 2020.

Celebrating its 20th anniversary this year, FreshDirect is a leading online fresh food grocer, delivering directly to customers across seven states and throughout the New York, Philadelphia, and Washington, D.C. metropolitan areas. FreshDirect is committed to sourcing the freshest and best-tasting meat, fish, produce, and specialty items through direct relationships with suppliers, growers, and farmers. Launched in 2002 and headquartered in the Bronx, NY, FreshDirect is a great local brand, part of the Ahold Delhaize family of companies. For more information, visit www.freshdirect.com.