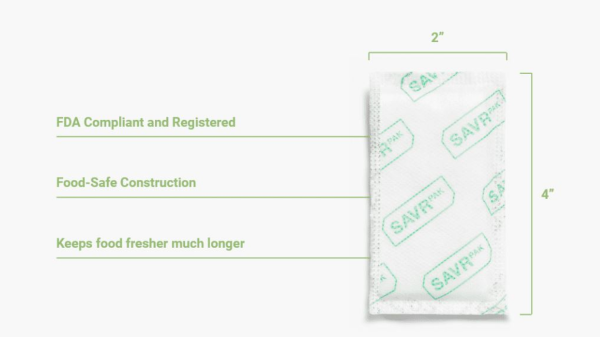 A new weapon has been brought into the war against food waste.

A California startup is rolling out a product that it claims will keep fruits and vegetables longer.

The company is called SAVRpak. One version, for berries, is a packet that is adhesively attached to the lid of a clamshell to capture condensation.

“Our patches are colder than ambient, and therefore they attract moisture,” says Grant Stafford, co-CEO of SAVRpak. When an item is temporarily unrefrigerated, the package attracts ambient moisture, keeping it off the fruit.

Another version, in the form of a packet, is placed in bags of fresh greens to achieve the same effect.

The company claims that its products can extend the life of fresh fruits and vegetables for anywhere from 4 to 14 days.

SAVRpak says its product is approved by the Food and Drug Administration and has a “food-safe construction.”

According to an article in Fast Company, “golden berries, a South American fruit, lasted at least 10 days longer than usual. Persian cucumbers lasted as long as 28 days.”

The technology was developed by SAVRpak co-CEO Bill Birgen, who has also invented environmental control technology for jets and spacecraft. Originally, he designed it for his own use after disappointments over wilted salads at lunch.

During the pandemic, the entrepreneurs worked with the foodservice industry to create similar packets to keep prepared dishes from being soggy during delivery. This version is kept frozen until use and then placed in the lids of to-go containers. Customers include foodservice giant Sysco.

SAVRpak expects to bring out the version for produce later this year.

The idea makes intuitive sense. We’re already used to moisture-absorbing packets in bottles of over-the-counter and prescription medication. Why shouldn’t another version of the same technology help extend the life of fruits and vegetables?