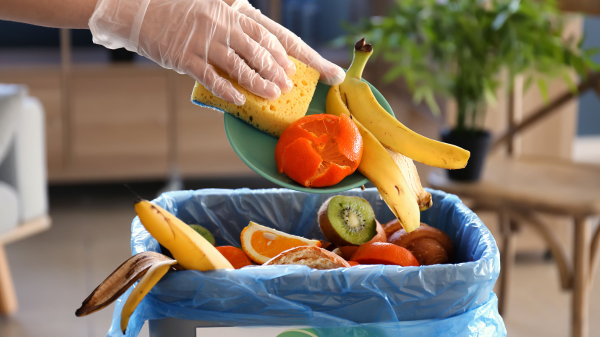 I open the kitchen garbage can, look down, and see a half-rotted Honeycrisp apple.

My family is part of the food wastage problem.

What percentage of food is wasted in the U.S.?

That amounts to somewhere between 492 and 1,032 pounds per person annually (estimates vary widely).

“Fruits and vegetables are the most commonly wasted foods, followed by dairy and eggs,” the report points out.

FLW (food loss and waste: you cannot write a government report without lots of acronyms) accounts for an area of farmland the size of California and New York State combined. Roughly half of this wastage occurs at the consumption stage (foodservice and household).

Loss here has the greatest environmental impact because this is cumulative the further you go down the supply chain. There is a certain amount of wastage if you disk a head of lettuce in the field. There is a great deal more if somebody has to pick it, pack it, ship it, and stock it in a store.

“In 2019, more than 35 million Americans were food insecure. . . . However, this food insecurity is not driven by scarcity. . . . Studies indicate that even if every American was provided with enough calories to meet their current level of physical activity and body weight, a surplus of 1,050 to 1,400 calories daily per person would remain. The amount of surplus food from retailers and consumers . . . is sufficient to feed 154 million people for a year . . . a far greater number than estimated by USDA to be food insecure.”

The study points toward a goal of halving food wastage. It indicates that this loss is best achieved by waste reduction rather than recycling. Furthermore, the greatest environmental benefits can be achieved by preventing wastage at the consumption level, and by focusing on the foods that account for the most wastage.

Which include, in the number one spot, fruits and vegetables.

At the very least, the report suggests that preventing food wastage will be a constant and increasingly pressing goal for the produce industry. Dismayingly, though, it does make even the vaguest recommendations about how this goal could be achieved.

One approach is by streamlined communications methods for connecting food that is in danger of being wasted with likely purchasers, such as Full Harvest’s business-to-business app.

On the personal level, there’s still a Honeycrisp apple in our fruit basket. I should eat it before it goes bad.