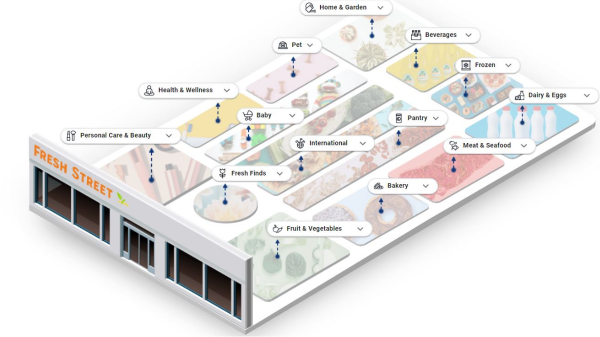 The future of online grocery is still very much in flux.

Online grocery sales fell to $8.1 billion in April versus $8.7 million in March, a 6.6 percent decline, and a 3.8 percent drop year over year, according to the latest Brick Meets Click/Mercatus Grocery Shopping Survey.

The downturn was particularly strong in the delivery segment: 6 percent year over year.

It remains to be seen how much online grocery owed to the pandemic and how much of its market will shrink as things return to normal.

One man who’s unfazed by this possibility is Mike Sayles, an entrepreneur who has launched Fresh Street, an app-driven supermarket that’s completely curbside. He has one location, at Lincoln and McCormick in Chicago, in an old Dress Barn location.

The business model is centered on people with cars but with very little time. They’re running around dealing with errands like soccer games, dry cleaning pickups, pharmacy visits, and other chores of the middle-class urban life.

It’s easy to see the appeal of the model. Urbanites driving around doing errands of this type have one worry at the top of their minds: parking. Fresh Market solves this problem: it has a parking lot where you pick up the orders. Nobody goes into the store, so the congestion is likely to be at a minimum.

The Fresh Market website is cleanly and accessibly laid out, based on the floor plan of a typical supermarket. You click on the department you want and are guided to the selections.

These prices seem to me to more or less in line with those in Chicagoland (although I live in the far western suburbs and do practically no grocery shopping in the city itself).

It’s an intriguing concept and may well fit nicely into a needy market.

I suppose if Mr. Sayles has an idea of doing well by doing good, he might give thought to opening one of these in one of Chicago’s food deserts. But that may require some tweaking of the model.