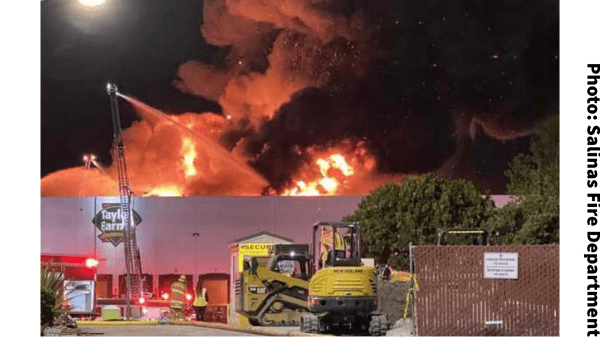 The company said in a statement that the plant at 1207 Abbott Street had been closed for the winter season, and the company was in the process of preparing it for the seasonal move to Salinas. No injuries were reported, and all employees were safely evacuated.

Taylor Farms plans to continue operating at its Yuma, AZ, facility for foodservice customers and continue to supply customers from facilities across North America.

KSBW Monterey, CA, reported that after the fire was contained, Hazmat teams assessed potential threats related to ammonia, but the Salinas Fire Chief says those threats appear to be minor.

According to the Monterey County Office of Emergency Services, as of April 14, an evacuation order in the industrial area of South Salinas remains in place, which affects businesses not residents.

A shelter-in-place order remains in effect for about 35,000 people in South Salinas.

The City of Salinas and the fire department plan to update on damage assessments and the shelter-in-place at news conferences scheduled for later today.