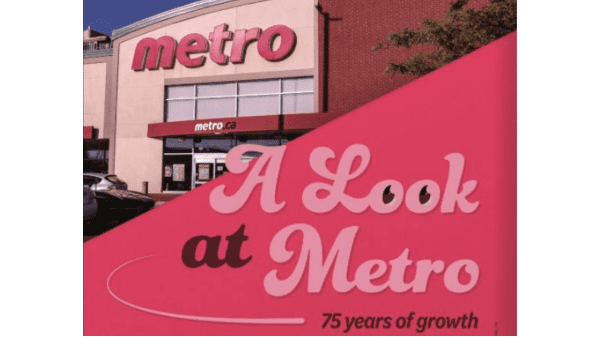 Metro Inc.’s BB #:116082 growth from a small cooperative to a major Canadian retail grocer is characterized by strategic alliances and mergers.

The company has its roots as a wholesaler dating back to 1947—the same year Frank Sobey opened his “modern supermarket” in Guelph, ON. Loblaw was already one of the country’s leading grocery chains.

To compete on price with the more established stores, 19 independent grocers joined Jeanneau to form a buying group, Magasins Lasalle Stores Ltée. Affiliates were required to own company stock, which allowed them to pool costs as well as share profits.

The Metro banner went up in 1956, inspired by the name of the planned Montreal rapid transit system.

Continued success spurred further growth and in 1972 Metro-Ltée. created its first stores with the supermarket concept.

A series of mergers beginning with the Marché Richelieu grocery chain in 1976 propelled newly named Metro-Richelieu to become a major competitor in Quebec.

By 1981, it was the largest association of grocers in all of Canada.

In 1985 Metro-Richelieu’s president, Jacques Maltais, launched a modernization and expansion program. The company dissolved a portion of the cooperative organization and was listed on the Montreal Stock Exchange. An initial public offering was launched in November 1986.

In 1990, Pierre Lessard was recruited to run Metro from rival Provigo Inc., in an attempt to restore the company’s footing.

Eric La Flèche, Metro’s CEO, has called Lessard a visionary and the architect of today’s Metro.

“He has a very good reputation in the industry,” says Sylvain Charlebois, senior director of Agri-Food Analytics Lab at Dalhousie University in Halifax, NS. “His training as an accountant did him well,” he notes, adding that Lessard “always had a sober look at the numbers.”

Under Lessard, Metro-Richelieu divested its restaurant and sporting goods assets and focused on the food and drug businesses, acquiring 46 Steinberg family-owned grocery stores.

In response, profits rose, and in five years Metro-Richelieu increased its market share in Quebec from 25 to 32 percent.

To counter the threat, Metro-Richelieu ventured outside Quebec for the first time in 1999, buying 51 Loeb supermarkets and distribution centers in Ontario from Provigo.

The company changed its name to Metro Inc. in 2000 as part of its broader geographic reach.

With fierce competition coming from the likes of U.S. behemoth Walmart, Metro launched its Metro Plus banner in 2003. The larger stores offer a wider variety of nonfood products and include organic food, health, and beauty sections.

Growth continued with additional acquisitions over the next few years, the largest being the C$1.7 billion purchase of A&P Canada’s 234 stores in 2005 and the C$4.5 billion acquisition of the Jean Coutu Group (PJC) Inc., a 400-store pharmacy chain in Quebec, New Brunswick, and Ontario.

Another purchase, Marché Adonis, provided a boost to the company’s ethnic foods category, while the Première Moisson Group brought expertise in specialty baked and gourmet products.

Both acquisitions added to Metro’s breadth, but more importantly, continued to operate under their own banners.

Carol Spieckerman, president of Spieckerman Retail in Bentonville, AR, says this was a prescient move. “The old model was to slap your name on the front of an acquisition,” she says. “The new model is to keep those banners intact.”

Doing so, she says, lets a company tap into a brand’s loyal customers and gives the buyer an instant market.

Concentrating on fresh has been another Metro focal point. In 2011 the company revamped its produce departments in response to less-than-stellar feedback on its offerings.

To remedy the situation, Metro introduced more variety and placed a greater emphasis on local and organic fruits, vegetables, and herbs.