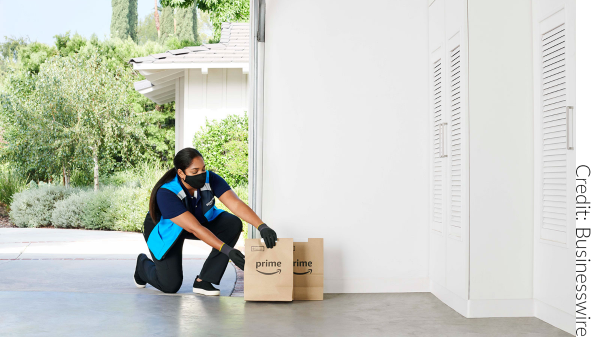 A couple of weeks ago, our garage door opener was on the fritz, so I ordered a new one from Amazon.

I found it in the hallway when I came downstairs the next morning. “It’s a miracle!” I exclaimed.

My son Robert had a more succinct explanation: “Slavery.”

You know your company has problems with its public perception when this is what a thirteen-year-old boy says about the way you treat your workers.

This came to mind when I saw that the workers at an Amazon warehouse in Staten Island, NY, voted to unionize last week.

“We’re disappointed with the outcome of the election in Staten Island because we believe having a direct relationship with the company is best for our employees,” Amazon responded.

But if one party to your “direct relationship” has problems with it, you need to reconsider that relationship.

“The vote represented a victory for U.S. organized labor and a milestone for labor advocates, who for years have considered Amazon’s labor practices a threat to workers,” Reuters noted.

Last year, workers at an Amazon facility in Bessember, AL, voted the union down.

But the National Labor Relations Board (NLRB) ruled that Amazon had violated election rules and ordered a new vote.

In a second vote, concluded March 31, Bessemer workers rejected the union, with 993 “no” votes and 875 “yes” votes, according to an initial count, but there are over 400 disputed ballots that need to be reckoned before a final verdict can be given.

The contrast between the two elections brings to mind one common regional difference in this country: Northerners tend to be more sympathetic to organized labor, Southerners less so.

Amazon is contesting the results of the Staten Island election. “There still is a long way to go before this union becomes a reality,” writes Adrienne Selko in Industry Week, “but it’s a signal that workers are willing to organize to get the pay and benefits they desire.”

Speaking personally, I’m neither pro- nor antiunion. I’m not blind to unions’ faults: Cesar Chavez’s increasingly messianic attitude derailed his United Farm Workers from its connection with California farmworkers, greatly diminishing its influence from the days when Bobby Kennedy marched along Chavez.

Years ago, I chanced to have lunch with the head of the Teamsters Union in Connecticut and Rhode Island (long story). His proudest boast was that he didn’t need bodyguards, which, I gathered, made him a rarity in his line of work.

All the same, I have a strong conviction that American workers are, by and large, fair-minded. They are willing to give their due to the company—often more—but they know when they are not being treated decently. In such cases, they may well feel that their only recourse is to unionize.

Is the produce industry exempt from these problems? Well, I see any number of notifications of abuses of the H-2A program by companies whose names need not be mentioned here. Since the H-2A program is heavily monitored by the federal government, I have to assume that there are many abuses in the industry that don’t get noticed or reported.

All in all, when a company unionizes, I suspect that in most cases the burden of the proof of innocence is on the employer, not on the workers.

In a way, this makes things extraordinarily simple for employers. Don’t want a union? Treat your workers right.