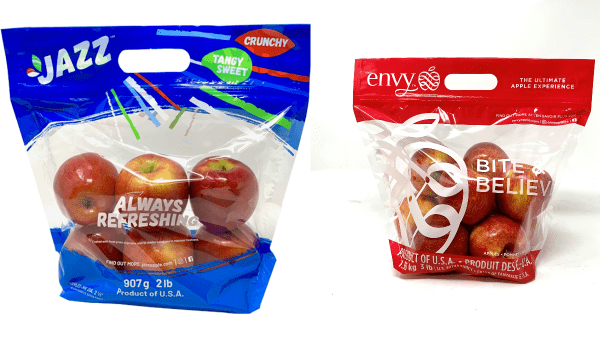 Apples are the second best-selling fruit category based on dollar value, accounting for nearly 12% of total fruit sales in Canada, according to Nielsen Canada, shared Cecilia Flores Paez, T&G’s head of marketing for North America.

“We’ve received remarkable feedback and seen significant growth in several key Canadian regions recently — both brands continue to gain traction thanks to our combined efforts with Oppy to build awareness and trial for our amazing brands with integrated campaigns.”

Oppy’s Business Development Representative Susanne Bertolas, who heads the Canadian market, highlights the value of showcasing JAZZ as the on-the-go apple to this next generation of shoppers. She added, “The deliciously crisp and tangy-sweet flavor of JAZZ, combined with its size, makes it the perfect snack — ideal for at school, home or work.”

Continuing efforts through to Quebec, Bertolas represented Envy apples at The National Women’s Show at the end of 2021 which was noted as a renowned success.

“The province is quite localized and can be a difficult market to penetrate, and that’s why we were so pleased that everyone who tried it, loved it. With over 1,000 consumer samples distributed, our report indicated that nearly 100% said they would buy it.” Though Envy is not widely distributed in Quebec, primarily due to strong distribution of local-only apples, Bertolas considered the event to be a breakthrough.

As the team looks to getting boots on the ground again on April 6, CPMA attendees can anticipate Envy™ apples featured in and around the trade show in surprising ways, including at the annual banquet, which Oppy is sponsoring.

Visit Oppy at booth #1209 and learn more about featured brands Envy™ and JAZZ™, along with Divemex, Ocean Spray and Zespri, while also grabbing a cup of joe. Just across the aisle is a complementary booth exhibiting Oppy’s latest innovations: brands UP Vertical Farms™, its first-ever vertical farming venture, which can also be found in the innovation showcase, and Ocean Spray Happy Berry™, its first-ever hydroponic strawberry line, which can also be found in the new product showcase.

“As the last CPMA was also in Montreal, and considering our recent efforts on the East Coast, we’re really coming full circle. I’m looking so forward to the energy of the show and being face-to-face with friends old and new, there’s just nothing like it,” Bertolas said.

About Oppy
Growing, marketing and distributing fresh produce from around the globe for nearly 165 years, Vancouver, BC-based Oppy discovers and delivers the best of the world’s harvest. With over 50 million boxes of fresh fruits and vegetables grown on every continent moving through its supply chain annually, Oppy offers popular favorites from avocados and berries to apples and oranges year-round, alongside innovative seasonal specialties. Over the years, Oppy has introduced North Americans to a number of items across its diverse produce range, including Granny Smith, JAZZ™ and Envy™ apples, as well as green and gold kiwifruit. Go to www.oppy.com to learn more.

About T&G Global
With a strong 125-year history, T&G Global helps grow healthier futures for people around the world. Located in 13 countries, its team of 2,000 people both grow and partner with over 1,200 growers to market, sell and distribute nutritious fresh produce to customers and consumers in over 60 countries. The company is guided by kaitiakitanga, its sustainability framework. This means T&G treats the land, people, produce, resources and community with the greatest of respect and care, as guardians of their future. www.tandg.global

About Envy
Envy™ is a trademarked brand that refers to the Scilate apple variety, which is the result of a cross between Royal Gala and Braeburn. It was developed in New Zealand by Plant & Food Research in 2008. T&G owns the Envy™ trademark and it’s grown under license in 13 countries and sold to consumers in over 60 countries. www.envyapple.com

About JAZZ
JAZZ™ is a registered trademark owned by the T&G group of companies, that refers to the Scifresh apple variety. Originating in New Zealand, it was developed by Plant and Food Research and patented in 2003. JAZZ™ is grown under license by T&G in prime apple growing regions across the globe, including Aotearoa New Zealand, USA, Chile, South Africa, UK, Europe and Australia. www.jazzapple.com