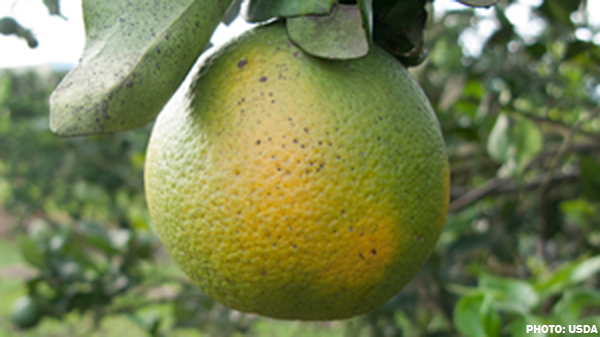 What’s going on with Florida citrus?

It has been widely reported that the Florida citrus crop for this year, at 44.5 million 90-pound boxes, is expected to be the smallest since the Second World War and 16.5 percent smaller than the previous year.

Yet in some areas, citrus plantings are on the rise, and some growers are starting to see them as a viable alternative to row crops.

Reduced output is blamed on the disease known as citrus greening (huanglongbing, in the California dialect). It is still spreading throughout the region.

“The disease that has devastated the Florida citrus industry has been spotted in multiple locations in the Southeast in recent years, including earlier this month in a small grove in Grady County, Georgia,” reports Citrus Industry News. “Citrus greening was also discovered in the Florida Panhandle’s Franklin, Leon, Escambia and Washington counties in 2021.”

Citrus greening isn’t curable, except by pulling up and destroying the trees, which can be heartbreaking after a multiyear investment of time and money. The best prevention method is to control the disease’s insect vector, the Asian citrus psyllid.

Florida citrus is primarily goes to juicing and processing—87 percent, in fact. But it is also the world’s largest producer of grapefruit.

Some hope may lie in the Donaldson tree. Florida Citrus Commission chairman Steve Johnson says, “Recently rediscovered at USDA’s Whitmore Farm, this decades-old tree is abundantly producing early-season oranges and despite being infected with HLB, appears as healthy. The fruit it bears is pretty close to what we all strive for today—the size, quality and hardiness we might have taken for granted in our pre-greening years. As we continue to feel the impact of this disease in our groves, the Donaldson tree is a beacon of hope.”

Is the industry putting too much hope into a single tree? Possibly, but then there were those two orange trees in Riverside that were the ancestors of all navel orange trees grown today. (One of them still survives.)