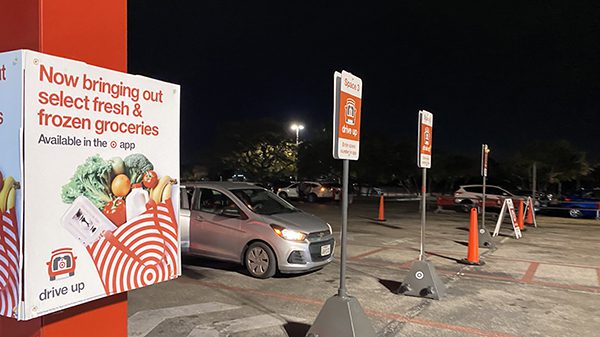 This may be nit-picking word choices here, but doesn’t this sign make you feel like Target’s grocery pick up is an afterthought?

You know how Target BB #:166987 has that reputation for hypnotizing customers (typically suburban moms) into walking in for cat litter and somehow spending $170 on curtains, clothing, and napkin rings?

I must have become immune somewhere along the way.

I also remember choosing Target as the Produce Retailer of the Year at my previous job, based on opening themselves to innovative programs and expanding fresh produce into more than 1,700 stores. Now, the company is spending $5 billion dollars on store improvements and riding high on increasing digital sales.

I hope they spend some money improving produce because I’m not feeling it. I live in the suburbs of Austin, Texas, close to an “old” version of Super Target, and a redesigned-remodeled Super Target, and I feel like they’re missing the mark when it comes to groceries.

I stopped by the remodeled store last night while my son was at soccer practice, just to get a fresh look at produce and because, honestly, I hadn’t bothered in a while. The walk through only reinforced my “meh” attitude.

For what is supposed to be a full-size grocery store, the adjacent wine and beer department was bigger than produce.

The department looks deceptively big, but it’s actually quite limited. I stopped counting around 75 stock keeping units of fruits and vegetables. Produce is sold by unit price, and some of the prices are outrageous, like $1.89 for a single (relatively small) Honeycrisp apple. There was a lot of repetition. At least a third of the dry table space was taken up by mandarins and (bagged) Sumo citrus.

Bagged Sumos kind of defeat the wow factor of how big those mandarins are, but I’m guessing they didn’t want to add a single piece Sumo mandarin to their systems.

You have to walk through a maze of specialties like hummus and cheese to get from the perimeter produce like avocados, citrus, and apples to get to a wall case with salads and other fresh-cut items.

This wall has what you’d expect (carrots, salad mix, broccoli, beans, etc.) mostly under Target’s own brand Good & Gather. I know I was there late in the evening, but someone must have recently come through and stickered items close to their sell-by dates because a lot of packages had those “manager special” type coupons on them.

This store has completely done away with the wet wall, which is probably a good thing considering the abysmal state of the wet veg at the “old” Super Target by my house.

I thought I’d save myself a trip and grab cilantro on a recent visit (my son wanted Lego and Target is fantastic for that). I went to the produce department and all I could find was either mushy pre-packaged or shriveled wet rack failure cilantro – for $1.39. That’s preposterous. This is Central Texas, not upstate New York. Cilantro is under fifty cents everywhere here, and in abundant supply. I had to stop at H-E-B on the way home.

Walking through the rest of Target’s new store design for me, is a confused jumble. Some categories are laid out like a department store, like small appliances, and some are a baffling assortment of things like Swiffer mops in the same aisle as razors.

Toys, makeup, clothing, and the impulse home décor stuff is where most people are loving Target, I think. Those departments are enticing, and more like a showroom.

Since the pandemic started, this store also carved out more space for pick-up, which Target is putting heavy emphasis on in new initiatives. Signage in the pick-up reinforces that the retailer is “Now bringing out select fresh & frozen groceries.” Just now? Really?

Walmart, and pretty much every other retailer are way ahead of you on this one, Target.

If Target is going to make a stand as a destination for grocery and not just trendy tchotchkes, they have a lot of catching up to do.