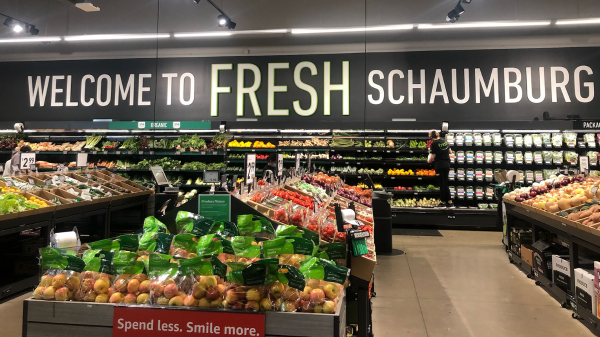 In the past, I have betrayed a certain lack of fondness for the Amazon Fresh BB #:283186 concept. I admit that this is an entirely subjective response based on my visits to the Bloomingdale, IL, location.

Nevertheless, an article on CNBC by Annie Palmer seems to reflect my views. It quotes Jake Dollarhide, CEO of Longbow Asset Management, which has counted Amazon as a core holding since 2011: “Amazon’s all about the cloud, e-commerce and entertainment. It’s almost like the grocery business is an expensive hobby.”

Amazon has made many forays into the world of retail grocery, including its Fresh, Go, and Prime services, as well as its famous but far-from-brilliant purchase of Whole Foods BB #:147784 for $13.7 billion in 2017.

After all this trouble, Amazon and Whole Foods together accounted for a mere 2.4 percent of the gigantic American retail grocery business in mid-December 2021.

“Amazon’s physical stores unit, which includes Whole Foods and Fresh stores . . . saw lower sales in 2021 than in 2018, even as its footprint of leases expanded by 17% over that stretch,” Palmer writes.

Rather peculiarly, Palmer adds that Amazon Fresh stores “appear to be a hit with consumers.” She cites research by the firm Placer.ai from October 2021 as saying that “monthly foot traffic has more or less stabilized at most of these venues. The relative steadiness in visits shows that a core group of customers have added a trip to Amazon Fresh to their regular grocery routine, indicating that Amazon Fresh has successfully integrated into the grocery mix for the neighborhoods it entered.”

It is very hard to look at the graph that accompanies this statement and come to same conclusion. Of the seven stores listed, foot traffic “stabilized” at a level below the initial baseline at five of them. At the Fullerton, CA, location (by far the best performer), foot traffic fell from March, when it was slightly over 120 of baseline, to under 60 percent.

And take a look at the one in Woodland Hills, CA, named by a European firm as one of the top 50 grocery stores in the world. Foot traffic here had fallen to -9.5 percent of baseline in September.

And one can only imagine what that baseline was. I went to the Bloomingdale, IL, store on opening day, and it was practically empty.

The obvious answer is clear: the genius that made Amazon such a success in online shopping is not the same as the genius that is needed in retail grocery. It’s nice that Whole Foods introduced its 365 store brand to make itself more affordable, but Whole Foods is not as good as it was when Mr. Bezos put it in his pocket.

It does not seem likely that Amazon will acquire that talent anytime soon.

“Tony Hoggett, a veteran of British supermarket chain Tesco, was brought on to lead physical stores,” Palmer writes. “Hoggett’s hiring was seen as an acknowledgment by some employees that the company needed more brick-and-mortar experience.”

Possibly—but brick-and-mortar experience at British giant Tesco does not necessarily translate into an understanding of the American market.

I’m no Nostradamus, but current evidence suggests that Amazon will say sayonara to its Fresh/Go enterprise in a couple of years and sell Whole Foods to somebody who understands retail grocery.