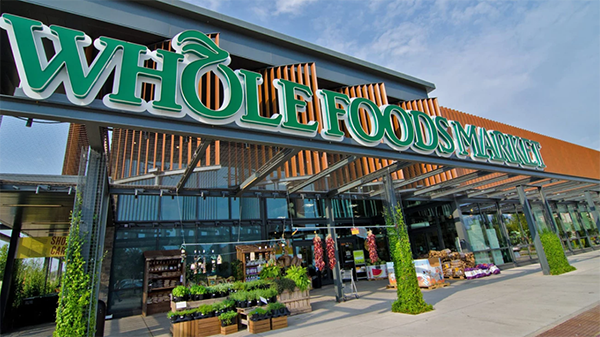 I lived in San Francisco for close to twenty years, but I haven’t been back since 2010. It’s not always easy to visualize what’s been happening there.

“The store’s design will draw inspiration from the former Crystal Palace Market, the feel of the Tenderloin district, and the colors of the Golden Gate Bridge, the company said.

Despite being in a busy street in Civic Center, this new location will have curbside pickup,” reports San Francisco’s KRON4 News.

The store will be in Trinity Place, a luxury apartment complex that did not exist when I lived in the city (or the City, to go with the natives’ preferred capitalization). The store is located at 1185 Market Street, somewhere around the intersection of Eighth Street, an area that, in my time, was chiefly known for not being known for anything.

I don’t know what “the feel of the Tenderloin district” means. The Tenderloin district, epicenter of drug abuses and homelessness, is indeed nearby—one block away, to be exact. Given the City’s lax attitude toward sanitation in recent years, the feel could perhaps best be described as scatological.

(For a video of the neighborhood that has probably not been approved by the City’s tourist commission, see here. It looks exactly the way I remember it).

If Whole Foods wishes to reproduce the feel of the Tenderloin, they will have derelicts in the liquor department throwing bottles at your head.

When I moved to San Francisco in 1980, aging members of the counterculture were sitting around complaining that it wasn’t 1967 anymore, but there was still plenty of the Summer of Love in the air.

One element was the hippie grocery store, often cooperatively run. It contained many things that were then novelties: tofu, seitan, wheatgrass juice. I remember one co-op on Sanchez Street in Noe Valley, where honey was self-dispensed. You pumped it into a container out of a plastic barrel. Customers were not very good at this, so there was always a sticky mess on the floor.

A more sophisticated manifestation is Real Food, a market on Polk Street that I used to frequent because it was on the way home from work. I didn’t believe it, but Real Food is still there. Promotional photos are not always to be believed, but it looks considerably more stylish than it did in 1997.

From their website: “Our produce department strives to source as much as possible from local California farms whenever possible. Our vast selection of 100% organic produce includes all the lettuce, citrus, roots, and kale you could ever want. Because all of our produce is organic, we are sometimes out of items as they fall out of season. While this may be inconvenient for some this is a good thing as it means your fresh produce isn’t coming from across the world.”

Real Food has clearly found a niche, and that niche is what San Francisco is all about: focus on natural foods of the highest quality and have the money to spend on it. (The store is just down the street from fashionable Russian Hill).

You could think of Real Food as a step between the old hippie co-op with puddles of honey on the floor and Whole Foods’ Trinity Place flagship, which features “an array of organic, conventional, local and Sourced for Good produce, plus offerings from more than 32 local farms, including mandarins from Fruitworld, salad greens from Plenty’s San Francisco farm and organic mushrooms from Far West Fungi.”

Certainly, the new store’s standards will have to be top-notch. Trinity Place apartments are (as you would expect) staggeringly expensive. But if I were going to pay that price, I would like to feel a little safer walking a block or two away.