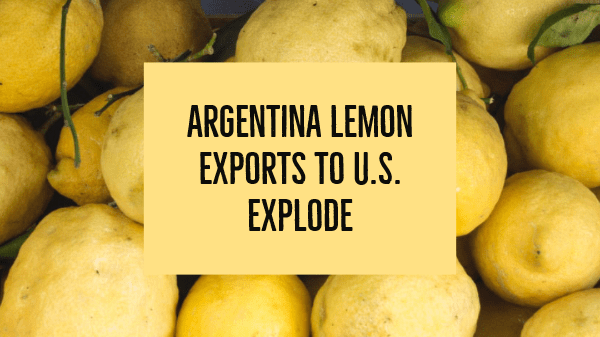 With the export season yet to be completed, Argentina has already doubled its fresh lemon exports to the U.S.

Sales to the North American market increased from 33,536 tons in 2020 to 72,981 tons so far in 2021, according to data from the National Agrifood Health and Quality Service (Senasa).

This is only the third year that Argentina has exported to the U.S. after the reopening of that market. A court ruling in 2001 excluded the product amid pressure from California producers. The market reopened in 2016, but it wasn’t until August of 2017 that it became operational.

Pablo Padilla, the president of the Citrus Growers Association of the Argentine Northwest (Acnoa) told La Nacion: “Although the season is still ending and we do not have the final numbers for derivatives exports, projections indicate that the exported volume reaches approximately $70 million and last year it was approximately $30 million”.

He said he believes the country has generated sufficient volume this season but is not sure if the same situation as this year will repeat itself in 2022, as he said it would depend the supply of American lemon producers.