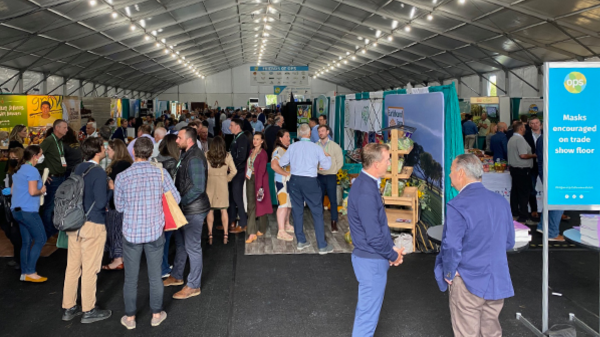 The expo floor of the Organic Produce Summit Sept. 16, In Monterey, CA, stayed busy until the end.

MONTEREY, CA — Navigating a crowded expo floor of the Organic Produce Summit BB #:348436 Sept. 16, the same topic came up time and again – and it wasn’t the standard “How’s the show?”

Everyone wants to know the fate of the Produce Marketing Association’s BB #:153708 Fresh Summit at the end of October.

Coincidentally, this topic was the talk of the trade show floor a week ago at the Southeast Produce Council’s Southern Innovations…and we’re no closer to an answer.

PMA sent a notice to exhibitors last week that set off the buzz, recommending exhibitors “hold off as long as possible in planning and before making additional investments.”

There hasn’t been official word from PMA since the notice went out, though I heard talk of difficulties getting hotel reservations due to storm-displaced residents of New Orleans, and of exhibitors having second thoughts about attending this year.

The flip side is that most people are thrilled to be in-person at the shows I’ve attended this year so far, including two hosted by the Southeast Produce Council, the Texas International Produce Association’s Viva Fresh, and now the Organic Produce Summit.

Based on the at-capacity buyer tours hosted on Sept. 15, and the lively exposition floor – that stayed lively ‘til the end – there are a fair number of produce industry members enthusiastic for in-person events.

But the challenges presented by a continuing pandemic and repeated severe weather events may make it impossible to hold the event many in the industry were hoping for.