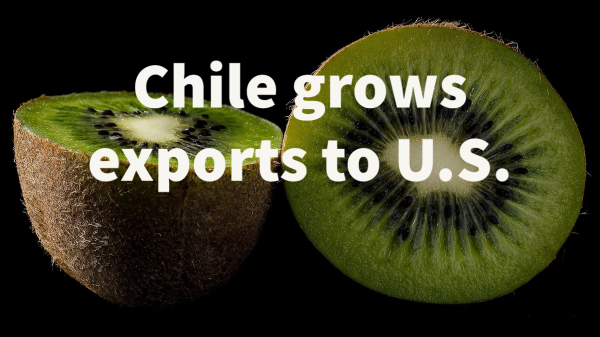 The latest Crop Report provided by Chile’s Kiwi Committee highlights Europe as the largest importer of Chilean kiwifruit with 47,824 tons, although it registered a decrease of 6 percent when compared to 2020, as reported by Simfruit.

Within Europe, only the Netherlands and England showed increases in their imports, 46 percent and 2 percent, respectively.

Chile has exported more than 22,000 tons of kiwifruit to the U.S. through the first half of 2021, representing 22 percent more than the same period last year.

While in the Far East, there was a general decline of 11 percent. This would be explained by the fall in imports to China-Hong Kong of 56 percent, leaving India as the main destination in the region with 13,496 tons, reflecting a growth of 35 percent when compared to 2020.

Up to week 32, there was a 2 percent volume decrease when compared to the same time period last year. Europe and Latin America remain the main destinations to date.

Shipments to Latin America reached 23,932 tons, with Brazil, Mexico, Argentina, and Colombia being the main destinations.

In the Middle East, exports totaled 5,727 tons, with Audi Arabia and the UAE being the main destinations.

The non-Hayward varieties reflect a growth of 4 percent when compared to the previous year.