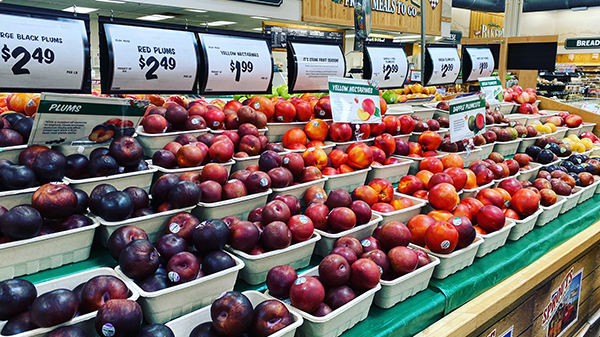 AUSTIN, TX — Whenever I’m in a funk and need inspiration, I store check.

The pandemic has put a damper on my travels to see retailers outside of my metro area, but I recently realized I’ve been in a rut because I haven’t really spent any time just looking around the store lately.

I’ve been in a hurry or have been ordering grocery pickup. I buzz through the store as fast as possible because I’ve got things to do, man.

Coincidentally, or not coincidentally, I’ve been blah about food – completely lacking inspiration. So yesterday, I took the afternoon to store check and see what’s new.

The first one I stopped at, Randalls BB #:105942, appeared to be nearly done with a fall reset. Autumnal foliage and hay bales were going up atop displays and everything looked NICE. The clerks had just come through and faced every display. It was almost retail-tour ready.

Stone fruit looked amazing, as did the organic wet rack, and I had my first Hatch chili sighting of the year.

The melon display in the entryway enticed me to pick two to try later this week with the kids.

My second stop is Trader Joe’s BB #:162286. I rarely go there because it’s far and out of the way. There’s also the fact that I can’t get out of there without spending $80 on snacky food I don’t need.

Of course, I went home with a bag of weird snacks, but not much fresh produce.

Next up was H-E-B’s BB #:106490 Central Market, my go-to place for foodie inspiration. I picked up some Lori Anne peaches from Titan Farms BB #:175539, some organic black plums, and a fiber clamshell of fancy strawberries I’ve been wanting to try that my regular store doesn’t carry.

I decided to swing back toward home and stopped at my favorite Sprouts BB #:168563 location in Austin. It’s a store I don’t usually visit because it’s too far out of the way, but the folks at the Great Hills Trail Sprouts do a great job throughout the store.

Sprouts appears to be trying some new things here in Austin, including expanding the center store and adding self-checkout. In produce the sets kicked up the farmers market appeal, particularly in stone fruit. There was a gorgeous display of an array of colors in compostable trays.

I didn’t plan to stop at my regular shop, H-E-B, but I forgot to pick up limes for dinner so I went to the “fancy” Lakeline store as my last stop, and I’m glad I did. There’s nothing wrong with my “regular” H-E-B, but it’s one of the oldest in the area, and just doesn’t have the space to really blow out some displays.

There I found a gorgeous promotion of Family Tree Farms BB #:169364 Midnight Rose Apriums in these striking purple bags, with signage on the end cap.

Irresistible, though the pouch bag set me back like $11 (with a $2 off in-store coupon!).

I went home with a cooler and several bags of goodies, but also a bunch of ideas for later.

As a consumer, I can’t be the only one suffering from a case of the blahs. Based on the content I’m seeing from recipes and influencers, a fair chunk of consumers are in my shoes and need a boost.

What can retailers to do entice them to slow down and sniff the stone fruit?