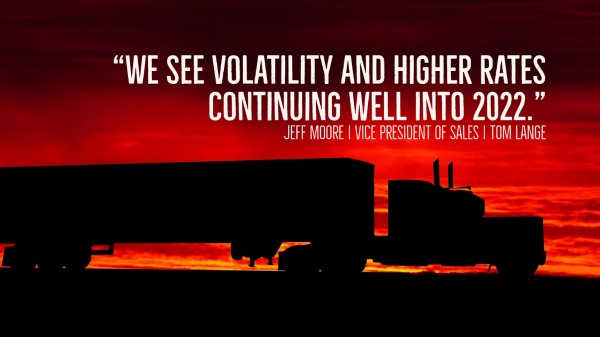 The cost to haul fresh produce keeps rising, and it likely won’t stop this year.

The reasons are many, from the classic supply-and-demand, to a rebounding economy, to the extra cost for specialized transportation used in fresh produce.

“The costs of everything are going up, and it looks like we’re in an inflationary system,” he said. “Produce is just-in-time inventory, and there’s fewer of them. It’s not a normal market, and carriers who are good are very well off.”

“We see volatility and higher rates continuing well in to 2022,” he said. “Not to over-simplify matters, but it’s always about supply and demand… With that said, demand remains robust, and non-produce shippers would probably tell you they have many of their own challenges as well. For produce companies, any opportunity to consolidate pickups and limit drops is a must.”

According to USDA’s fruit and vegetable truck rate report for May 4, 2021, of the 22 growing regions sending loads, 12 are seeing a shortage, six are slight shortage and only four have adequate availability.

Produce from Mexico is up 5-15 percent over last week, the report says, and most regions are seeing 1-5 percent rises from last week. Some regions such as the Midwest and Northeast saw no rise.

Labor shortage
Lack of labor affects many industries inside and outside of agriculture, and in transportation, the long-term problem is getting worse and is a more immediate problem than lack of trucks.

“Short term, I feel both are of great concern,” Moore said. “Long term, economics will kick in, and transportation companies will invest in more capacity. That does not address the lack of drivers that we still see as a risk.”

He said with food and overall delivery gaining consumer acceptance, drivers who used to do long-haul loads no longer have to.

“We are competing with newer industries and more regional shipments that can get drivers home more often or even daily,” Moore said. “That’s not always possible on a large scale for some of our commodities.”

Adding to the lack of supply has been International Roadcheck May 4-6, Rose said, which keeps some carriers off the road.

Rose said supply and demand is always a cycle, and demand has been outpacing supply for a while.

“We’re a year into the top of the cycle, and it should last through this year,” he said, but then likely ease off as trucking companies invest in capacity.