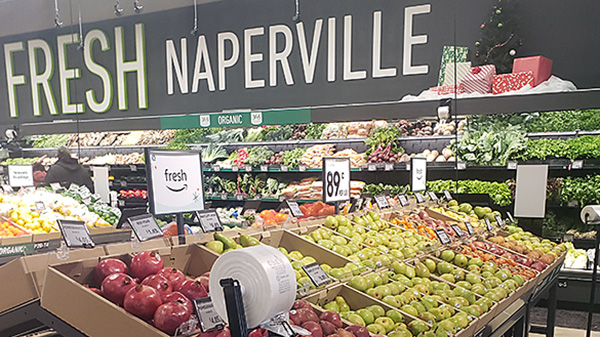 Maybe I just didn’t go with the right attitude.

A couple of months ago, I wrote a column expressing skepticism about Amazon’s BB #:283186 foray into brick-and-mortar retail grocery. But then I came across an article in Supermarket Retail entitled “Why Amazon Fresh Stores Will Likely Rock a Few Boats” (Unwritten rule in trade magazines: never pass up a good cliché).

So I decided to reevaluate my position by driving to the Amazon Fresh store that has just opened in Bloomingdale, IL. It is located, perhaps inauspiciously, on the gravesite of a retail catastrophe, a defunct Toys “R” Us. More Amazon Freshes are coming, 28, to be precise.

The store itself, though mostly inoffensive, had the air of an unfortunate mating between an Amazon warehouse and an Aldi. At 40,000 square feet, it’s the size of a typical supermarket, but the selection is much skimpier: there is a lot of shelf space devoted to the same item.

As for produce, the selection was again small and far from remarkable.

Sumo oranges were $2.99 a pound, which is what I’d paid the last time I’d bought any (although, come to think of it, that was at an Amazon-owned Whole Foods). Dragonfruit were at the high and rather peculiar price of $9.32 a pound.

I didn’t buy much, because my wife was about to go to the Mariano’s in Wheaton, IL, where we shop regularly, but I did want to see what the Amazon Fresh shopping experience was like, so I bought a gallon of milk at $2.99. (It’s $2.69 at the Costco a few blocks away.)

I’d just joined Amazon Prime a few days before, so I didn’t have the app set up on my phone, but the young woman at the service desk was very helpful in helping me get it.

Checkout was another matter. Although I did have the app, something went wrong with the QR code, necessitating a visit from the manager. For some reason, I couldn’t pay with the debit card that I had registered on Amazon, even though it showed up on the app, so I said I would pay in cash. (That was what I originally said I wanted to do, although the clerks didn’t hear me.) So cash to the tune of $3.04 changed hands.

Normally you would find this kind of holdup irritating, but after all, I was writing an article on this place, so everything was grist for the mill. (See previous comment on clichés in trade magazines.)

At this point, I started to laugh, and I couldn’t resist telling them why.

“Actually,” I said, “I’m a journalist writing an article on Amazon Fresh.” The clerks laughed too, nervously.

When I got home, I found an email telling me that Amazon had charged my debit card $3.04 after all. I did ask for a refund; let’s see if I get it.

All of this confirmed my previous impressions about Amazon Fresh.

My wife had gone to the one in nearby Naperville, IL, and didn’t care for it either.

In short, I suspect that the established entities in brick-and-mortar grocery don’t have to tremble too hard at the thump of Amazon’s feet.

My opinion isn’t merely based on one brief visit. In the first place, gargantuan enterprises tend to stumble when they drift too far from their core businesses.

And brick-and-mortar grocery is far from—perhaps opposed to—Amazon’s core business, which is this: you go online, you click a few buttons, and the product arrives a few days later (two days later, with Amazon Prime.)

In the second place, Amazon’s track record in brick-and-mortar grocery is poor. Whole Foods has, by most accounts (including mine), declined in quality since Amazon took it over in 2017.

I mentioned this fact to Produce Blueprints and The Produce Reporter’s retail columnist, Bruce Peterson, and he explained, “First, they lowered prices (margin impact). Next, they stripped the stores of labor (to offset margin). As a result, they denigrated the very thing they bought the company for in the first place: cachet. The ‘crime,’ in my mind, was to not listen to those whose expertise they bought.”

Finally, whom is this place supposed to be for? I don’t see it competing with Costco or Walmart or Aldi on price. Affluent, sophisticated shoppers, attracted by ambiance and novelty tidbits, aren’t going to come a second time. A visit to Amazon Fresh is like being held over for an hour at the airport.

No doubt Bruce is right about the short term. But in the long term, focusing too much on shareholder value is unwise. Ultimately even the august shareholders must kowtow to the real master: the humble customer. It is the customer who funds the paychecks and pays the utility bills. Anyone who forgets that the customer is the real boss is making a huge mistake.

Is Amazon Fresh making that mistake?

At the exit of the Bloomingdale store, a young woman in a kiosk was handing out samples of a fizzy water called AHA. As I took one, she asked, “How was your experience here?”

Correction: An earlier version of this story had an incorrect location for the Bloomingdale, IL, store.