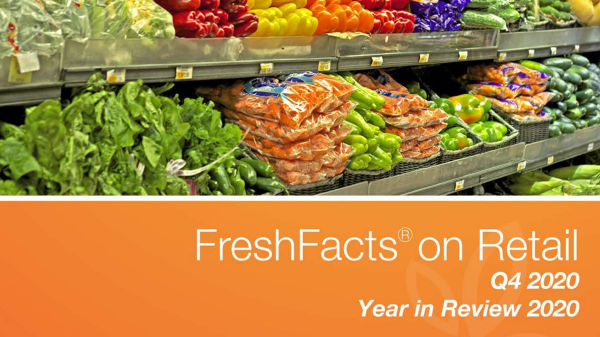 As expected, pandemic trends at retail continued, and that has been good news for the produce department. 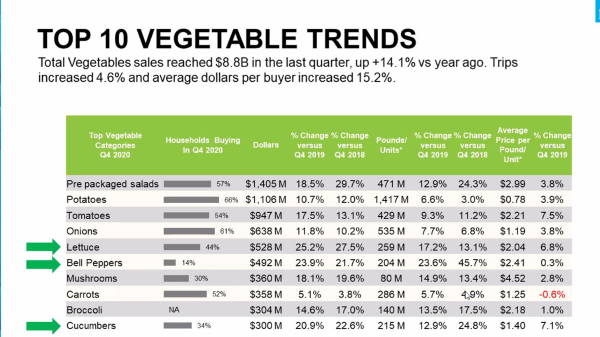 Pre-packaged salads continue to be the No.1 item in dollar sales and are getting close to one-third of vegetable sales, he said. Lettuce, cucumbers, and bell peppers were all up more than 20 percent over a year ago.

Earlier this week, the Produce for Better Health Foundation BB #:157162 released its State of the Plate: America’s Fruit and Vegetable Consumption Trends research, which showed overall produce eating occasions have fallen in the past five years. Vegetables fell significantly, while fruit showed a slight gain.

However, PBH points out the research was done prior to the 2020 pandemic.

When asked on the webinar if there was optimism that this retail sales surge may be countering the PBH research, Jeff Cady, Director of Produce and Floral at Tops Friendly Markets, BB #:103173 said he’s seeing some signs that may be true.

“I’m hoping,” he said. “The people that eat produce are eating a whole lot more.”

PBH CEO Wendy Reinhardt Kapsak said one reason that produce eating occasions could be falling is that they’re not convenient enough.

Galaburda said he agrees that has been a barrier.

“We’ve seen an explosion I value-added, so that should increase eating occasions,” he said. “I think it will continue in 2021.”