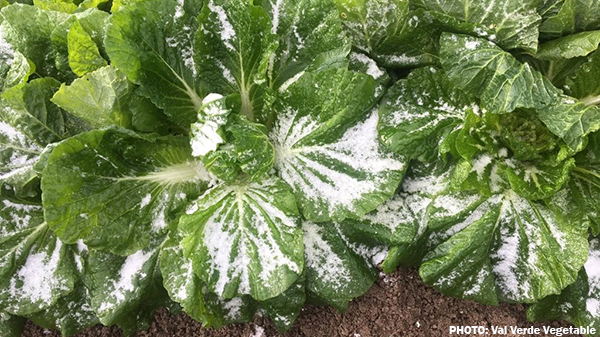 Assessments are ongoing in the Rio Grande Valley as growers are hoping some crops can survive consecutive days of freezing temperatures.

Rio Grande Valley grower-shippers say the damage is bad, but more time is needed to see how the plants bounce back, if at all, after freezing temperatures hit the region in mid-February.

“We don’t know a lot about what we lost since we are scheduled to have another freeze event on Thursday,” he said. “We will need to take a look at the smaller plantings that we had in the ground. Now it’s just a waiting game to see. Hopefully they can grow out of it.”

Hardier items like mustard greens, turnip greens, kale, and collards may have a better chance than more sensitive crops like cilantro and dill.

One saving grace, Schuster said, could be that the temperatures decreased gradually instead of a 50-degree drop.

“We are definitely going to take a hit on our greens, but we are still assessing,” he said. “It is maybe not as bad as we thought.”

“Cabbage is very resilient and we’re optimistic, but there’s panic from the other side for St. Patrick’s Day,” he said. “Hopefully we can salvage some citrus, some onions, and some cabbage.”

Citrus was a pivotal time with some fruit still on the trees. Grower-shippers worked as fast as possible to harvest what they could, but much of what was left was frozen, he said.

This time of year also is crucial for next year’s crop, with many trees beginning to bloom. Some of those blooms have frozen, but how many were affected is unknown.

“My take is that citrus is going to be hit hard, and tender and leafy greens are probably toast,” said Dante Galeazzi, president and CEO of the Texas International Produce Association BB #:162361. “There might be a few people who employed some protective measures and were able to save a small part of the crop but far and wide we’re talking about some massive losses for Texas produce.”

This weather event will be devastating industry-wide, Galeazzi said.

Much of Texas is covered in snow and ice, which is creating a logistics nightmare. Drivers can’t get to trucks. Trucks can’t get into or out of the valley, and many cold storage facilities are without power.

“Trucks are not on their normal patterns right now, so equipment is very limited,” Galeazzi said. “Making deliveries, making pickups, communicating – there’s challenges in all of that.”

There will be pockets of supply outages at least the next 10 days while commerce is restored.