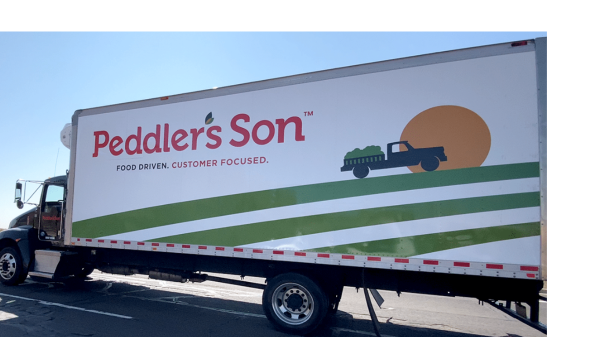 Locally Owned Peddler’s Son Has Grown from One $3,000 Truck To Bustling Company With $50 Million in Annual Revenue

PHOENIX, AZ — One of the Valley’s most respected providers of goods and produce has a lot to celebrate as this difficult year comes to an end.

Despite the effects of the pandemic, Peddler’s Son BB #:147148 has adapted to meet the needs of its restaurant, retail and institutional customers, and is launching a new brand identity as it moves into the new year.

Additionally, the company has announced a significant new agreement with Arizona State University to supply the university’s food service outlets, and is bringing on a new Chief Operating Officer to help guide the company and its $50 million in annual revenue.

The new brand identity — spotlighted at the company’s new web site at PeddlersSon.com — is designed to showcase the company’s growth from a one-person, one-truck operation when it was founded by Ted Palmisano in 1988 to its present-day stature as a trusted provider of multiple types of goods and produce for hundreds of Arizona businesses.

“Our company has changed a great deal over the years and we’ve been fortunate to enjoy some organic growth over time,” said Ted Palmisano, who co-owns the business with his brother Joe. “We’re now focused on more strategic growth for ourselves and our 170 employees, and this new brand and expansion of our leadership team is an important part of our future plans.”

Orlando Andrade recently became the company’s new Chief Operating Officer. Prior to joining the Peddler’s Son family, Orlando’s previous experience includes several years working in operations, transportation, procurement, finance, sales, and marketing. Prior to moving back to Arizona, Mr. Andrade, held some of the highest positions at a multimillion-dollar food distribution companies such as US Foods, where he gained tremendous experience in implementing process improvements that enhance efficiencies and minimize errors.

“We are beyond excited to be introducing Orlando to the Peddler’s Son family,” said Joe Palmisano. “As our company continues to grow, it’s critical that we expand and enhance our leadership team to meet the challenges and opportunities we will face, and Orlando is a perfect addition to that team.”

The company also continues to bring in new business, with its recent partnership with ASU being a prime example. Peddler’s Son now services a total of 19 different ASU food and grocery outlets, and has already taken more than 5,000 orders from the University in the second half of 2020. The company also recently added St. Joseph’s Regional Medical Center and the Supai Tribe as customers as well.

“We have a variety of different growth opportunities, and partnerships with organizations such as ASU are tremendously beneficial for our company,” Ted Palmisano said. “We appreciate the opportunity to be of service to the University and to tens of thousands of students and faculty each day.”

With more than 30 years of experience in delivering goods throughout Arizona, Peddler’s Son is one of Arizona’s most trusted wholesale delivery produce companies. Its mission is to bring its customers in the retail and restaurant industries the best quality products and provisions with convenient delivery.

The company’s clients include some of the region’s most prominent restaurants, grocery stores, educational institutions, healthcare providers and catering companies.

Peddler’s Son began with an intention to serve. Starting out on a few rough roads throughout Arizona, the company’s leadership has built a successful wholesale delivery service founded on quality, integrity, and transparency.

The company’s story began in the summer of 1988. With an early start in the produce industry from his hometown in Wisconsin, founder Ted Palmisano brought his vision of wholesale produce delivery to life by spending $3,000 on a delivery truck. From the back of his flatbed one-ton pickup, he built customized racks and assembled an open-air produce market.

At first, with a limited availability of just watermelons, cantaloupe, and honeydew, Ted grew his offerings and expanded his vision. Working out a deal with a manager of an Osco Drug store, Ted made his route from the farm in Apache Junction to sites where he could deliver produce to the townspeople across the Valley. Ted’s commitment to customer service, quality, and honest pricing enabled his dream to grow.

As business continued to boom, Ted enlisted the assistance of his brother Joe, whose background in finance helped Peddler’s Son progress to the next level. With Ted now able to focus on purchasing and warehouse operations and Joe overseeing sales and finance, Peddler’s Son was able to more fiercely contend with the competition, while maintaining its customer centric mindset.

In 1995, this once modest fruit and vegetable distribution company was bursting at the seams, prompting the decision to purchase a 17,000 square foot warehouse. This same fortunate circumstance would occur years later, once again prompting a move to its current 54,000 square foot facility in January 2015.

Today, the company boasts an annual revenue in excess of $50 million, with 130 employees and more than 35 vehicles serving Arizona and the Southwest. It’s products include fruits and vegetables, frozen and processed foods, grocery, bakery and pastry, meats and proteins, dairy and cheese, specialty and locally sourced products and packaging and supplies.

For more information and background on Peddler’s Son, visit the company’s new web site at www.PeddlersSon.com.