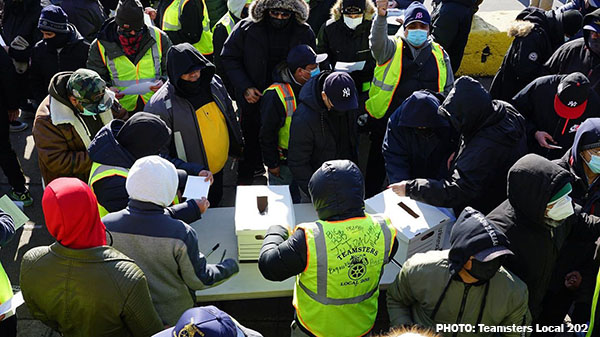 Members of Teamsters Local 202 voted 97% in favor of approving a new contract after a week on strike at Hunts Point.

After a week on strike, Hunts Point produce handlers are back on the job.

Teamsters Local 202 called the strike a victory after 97 percent voted to approve a new 3-year contract. The union had demanded a $1-per-hour increase in wages each year. The new contract guarantees 70 cents the first year, 50 cents the second year and 65 cents the third year, according to an article in the New York Times.

The previous contract included a 32-cent-per-hour increase, which Daniel Kane Jr., the Teamsters Local 202 president, said was not enough with workers at risk during a pandemic.

“I’m hoping that that will resonate with workers throughout this country because our members are essential, and decent, hardworking family people,” Kane said during a news conference.

“We have kept the city fed throughout the Great Depression, two World Wars, two recessions and now a global pandemic, without ever breaking our crucial role in the food supply chain,” he told the NYT. “New Yorkers can rest assured that they will continue to have access to a consistent supply of fresh fruits and vegetables…[even though] it cost us money and it was a tough week.”

The strike drew attention in the media with lawmakers including U.S. Rep. Alexandria Ocasio-Cortez joining picket lines. A handful of protesters were arrested, but the events remained peaceful.