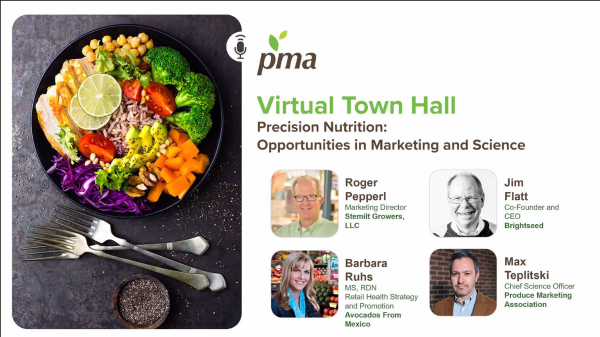 Precision nutrition is on the horizon, and it has the potential bring healthier diets to people like never before.

Barbara Ruhs, registered dietitian who works in retail health strategy and promotion for Avocados From Mexico, said the health industry still needs more data for precision nutrition to be meaningful, but it will show the importance of eating more fruits and vegetables.

Jim Flatt, co-founder and CEO of Brightseed, said he has optimism for younger generations to embrace it, and better nutrition in general, in the food-is-medicine way of thinking.

Ruhs said there’s a bigger opportunity now to use dietitians to spread health and nutrition messages to consumers.

Taste and exposure and critical to growing consumption goals, and people don’t necessarily need to focus on choosing between health and enjoyment, Ruhs said, from her experience growing avocado popularity.

“It’s OK to trick people into eating healthy,” she said.

Regarding how organic fits into this debate, Flatt said there are studies that show nutritional benefits for organic produce.

“Farming practices that are good for the planet often lead to better crops,” he said.

However, Ruhs cautioned that there are also studies showing little nutritional difference between organic and conventional produce.

“The big picture is each as much [fruits and vegetables] as you can,” she said. “I don’t want to confuse consumers between organic vs. conventional.”

Pepperl said that about 30 percent of Stemilt’s crops are organic, but many growing techniques that lead to better organic fruit are also used on the company’s conventional crops.

There are nutritional differences between fruits and vegetables grown certain ways and locations, Pepperl said, which should lead to growers seek out the highest quality they can.