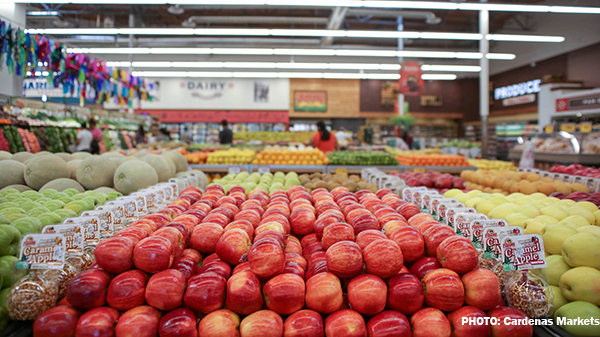 In addition to the top three—Northgate González, El Rancho Supermercado, and Fresco y Más, here are some other Latino retailers holding their own and expanding in the United States.

The deal made Bodega Latina one of the biggest Latino food retailers in the country, with 59 Fiesta Mart stores in Texas and 63 El Super banners in New Mexico, Arizona, Nevada, and California.

El Super
Back in 1997, Bodega Latina, a subsidiary of Mexico-based Grupo Chedraui, opened its first El Super grocery store in South Gate, CA, part of Los Angeles County’s Gateway Cities. Headquartered in nearby Paramount, El Super now has stores across the Golden State and in Arizona, Nevada, and New Mexico.

Vallarta Market
Founded in 1985, this Latino supermarket chain has grown to include 50 stores in California and nearly 8,000 employees.

Among the more popular store features are an array of specialty foods from Mexico and Central and South America, as well as prepared side dishes and meals from La Cocina, while freshly concocted beverages can be purchased at the La Isla counter. Stores also include meat and seafood departments as well as an extensive selection of wine.

Sedano’s
Cuban Armando Guerra opened the first Sedano’s supermarket in 1962 in Hialeah, FL. Since then, the chain has grown to include more than 34 locations throughout Central and South Florida.

In 2019, Sedano’s partnered with Takeoff Technologies to create the first robotic supermarket in the country. The new system allows customers to have their online orders fulfilled in real time by an automated system.

Bravo Supermarkets
This chain, founded in 1991 in the Big Apple by Krasdale Foods, a wholesaler and distributor of private label goods, has an impressive geographic spread: Bravo Supermarkets boast more than 70 locations sprinkled from New York to Florida.

But what makes Bravo really unique is that each of its mid-sized stores is independently owned and operated, allowing each owner to cater the location’s product lineup to the cultural and culinary needs of the surrounding community. This means an array of fresh produce, both conventional and organic, as well as plenty of Hispanic specialty items.

Superior Grocers
Superior opened its first store in Covina, CA in 1981. These days, the chain has more than 45 locations that trumpet their ability to offer the most competitive prices, freshly prepared side dishes and rotisserie chicken, homemade tortilla chips from the in-store tortillería, along with a heightened sense of community with nearby residents.

Stores pride themselves on not only a diverse selection of products but plenty of services like recipes and cooking tips to wire transfers, check cashing, bill payments. Superior Grocers is one of the biggest independent grocery chains in Southern California.

La Michoacana Meat Market
This Houston-based chain of small- to medium-sized stores was founded in 1986 and now has 140 stores in locations ranging from the Lone Star State’s larger, well known cities like Houston, Dallas, San Antonio, and Austin, but in plenty of smaller communities as well across the state. There’s also a store straight north of the Dallas/Fort Worth metroplex in Oklahoma City, OK.

Contrary to its name, the stores sell an extensive array of products, including a wide variety of fresh fruits and vegetables, authentic Mexican candies, fresh baked bread and sweet treats, tacos and tortas from its Taquería, a special South and Central American product section, and its highly popular selection of custom cuts of meat.

This is a multi-part feature adapted from a supplement to the September/October issue of Produce Blueprints magazine.