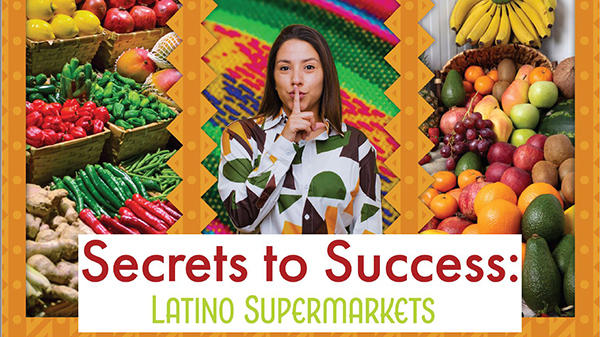 While the market may be ripe, it’s easy for mainstream retailers to assume that all Latinos have the same shopping and buying patterns.

This is patently false.

Yes, one thing all Latinos (except for Brazilians) share is a common language, but beyond that, their tastes, traditions, and favorite dishes vary according to country.

Brian Numainville, principal at the Lake Success, NY-based Retail Feedback Group, a consumer research consultancy, emphasizes the importance of understanding the customer base in each market, their countries of origin, and corresponding product preferences.

And to go a step further, using Mexico as an example, cuisine and cultural traditions can also vary by state—favored dishes in Chiapas are different than those in Puebla—just like shoppers in Texas supermarkets seek different products than those in Massachusetts.

“Successful Hispanic retailers do a great job at this and really create community for their shoppers,” explains Numainville. “It’s important to spend the time to really understand and listen to the needs of those shoppers, as they do vary from place to place.”

Catering to area residents
In Texas and California, both of which are home to numerous Latino grocery chains, the dominant Latino group hails from Mexico. But the number of Central Americans has been rising steadily over the past decade.

In Chicago, Latinos passed African-Americans to become the second-largest ethnic group in the city—nearly 75 percent are Mexican or Mexican-American, followed by Puerto Rican, Ecuadoran, and Guatemalan—and more than 2.2 million Latinos make their home in New York City.

Then there’s Florida, which is home to 66 percent of the country’s Cuban and Cuban-American population but has also seen an influx of South Americans from countries like Venezuela and Colombia over the past 15 years.

Overall, 10 states have more than one million Latino residents, and this number continues to grow.

Inside trumps outside
Although these groups may cook and eat some of the same foods or dishes, they may use a number of different ingredients.

At a Latino supermarket in Miami, for instance, where the average shopper may be Cuban, produce departments might feature a larger selection of tropical fruits and root vegetables or starches like yuca, malanga, or plantains.

In Los Angeles, on the other hand, the produce department might feature greater quantities of chiles or jicama.

“A Latino retailer will have huge displays of chiles right up front, with lots of boxes, and feature a sale or a great deal,” says Carlos Villa, president of Nogales, AZ-based Higueral Produce, Inc. BB #:192110

“If you go to a mainstream chain,” he adds, “they might have only one box. The differences in the displays are huge, and Latino shoppers pay attention to the displays.”

Pretty vs. ugly produce
Importantly, when it comes to most fresh produce items, Latino consumers are drawn in more by price and taste, rather than physical perfection.

But for people who regularly eat papaya, for example, the inside is what matters, not the blemishes commonly found on the outside of the fruit.

“Latinos consume a lot of items that don’t have the outward appearance of quality or perfection,” Vázquez notes. “Big retailers want papayas, but they want a perfect, yellow, blemish-free papaya. And a perfect papaya is like a Chupacabra: everyone knows what they look like, but nobody has ever actually seen one.”

Villa agrees. “Latino chains want it to taste good,” he says. “A jalapeño might be scarred and bigger, but it’s also going to be hotter, and that’s a big difference. The Latino shopper will choose based on taste, not looks. Sometimes perfect is the enemy of good.”

This is a multi-part feature adapted from a supplement to the September/October issue of Produce Blueprints magazine.