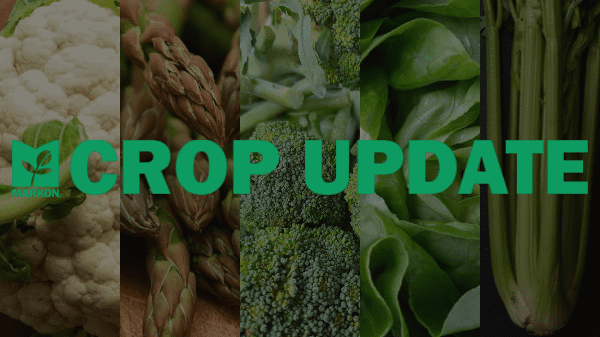 The August heat wave amidst the wildfires has a lasting effect on California vegetables, leading to volatile markets.

Broccoli and Cauliflower
Supplies have not fully recovered from heat-related damage in August and September. Demand has risen as more states open up business due to COVID closures. Expect volatile markets through mid-November; supply will continue to decline as the end of the Salinas season nears.

Iceberg
Demand is increasing as green leaf and romaine stocks are extremely limited. Additionally, the Canadian Food Inspection Agency’s romaine import regulations is shifting some demand to the iceberg market.

Volume continues to be impacted by the soil-borne diseases Sclerotinia and Impatiens Necrotic Spot Virus, that are reducing harvestable heads at the field level.

Industry field weights and yields are inconsistent due to periods of erratic Salinas Valley weather sustained over the last two months. Overall quality is good: puffy heads, seeder, and mildew pressure are present in some lots. Expect limited supplies and active markets through late October.

Industry volume continues to be heavily impacted by the soil-borne diseases Sclerotinia and Impatiens Necrotic Spot Virus that are reducing harvestable heads at the field level. Erratic weather over the past two months has resulted in inconsistent field weights and yields; fringe burn, mildew pressure, and seeder are present in some lots.

Supplies will remain tight until growing regions transition to the Arizona and California deserts in early to mid-November. Expect elevated markets through October.

Offshore melons will begin arriving in the U.S. in mid-November