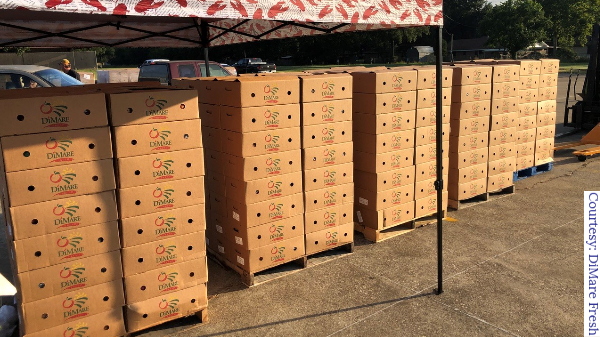 The USDA expects to have the September-October round of Farmer to Families Food Box contracts in place soon so that there’s no delay from round 2 to 3.

In a recent column, I was critical of USDA for not relying more on produce industry experts when making decisions about fresh produce in the food box program.

Late last week, USDA reversed its decision to allow some produce only boxes, but the preference is still for combo boxes. I reached out to USDA for comment on my column, and they weren’t able to make my deadline, but they responded August 11.

“Based on feedback from various sources, USDA believes the combination box will provide a more balanced variety of foods for a family,” said a USDA spokesperson. “Contractors can provide the variety of produce, meat and dairy in one box or split them up into separate boxes to be delivered to the recipient as a set.”

“While the preference is still to provide combination boxes through the program, if there are areas of the country where only a produce or dairy box can be provided, USDA wanted the flexibility to be able to serve those areas with these individual types of boxes.”

Blue Book talked both to produce suppliers who planned to partner with dairy and meat companies and make a Round 3 bid and those with bids in previous rounds who said they would not seek a Round 3 contract due to the requirement to pack dairy and meat in the food boxes.

The USDA spokesperson said, “the majority of current bid-holders have indicated they will partner with other suppliers to meet the preference for a combination box.”

My column suggested USDA develop better relationships with produce experts, and to that point, the spokesperson said USDA has worked with “a variety of stakeholders in the produce industry, including trade associations, states, and individual companies, and has taken comments from all into consideration.”

USDA included a Frequently Asked Questions document when it announced the Round 3 amendment.