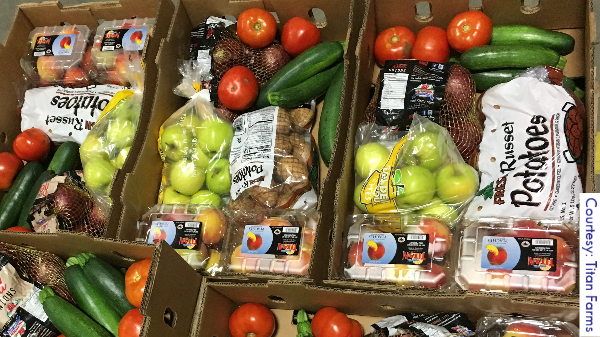 These food boxes were procured and packed by Titan Farms this summer.

USDA’s Farmers to Families Food Box program is unquestionably a success, as nearly 60 million food boxes have been invoiced.

The program quickly enabled qualified companies to pack fresh fruits and vegetables for newly needy consumers suffering from the economic effects of the COVID-19 pandemic.

And it provided produce growers an outlet for excess product that would have had to be sold for a loss or thrown away.

USDA also deserves praise for being open about the rules and bid process, being able to move quickly, and being willing to listen to the business community and make changes when necessary.

But when it comes to produce, it baffles me how USDA keeps getting some basic things wrong.

For instance, in the original bid process this spring, if USDA had required a PACA license from bidding companies, it would have spared them the embarrassment of giving bids to clearly unqualified companies. USDA now requires one.

When USDA announced the September-October contracts would require companies to pack 40-pound boxes filled with fresh produce, meat, and dairy, I knew it would force many produce companies out of packing for the program.

Some said they planned to bring meat and dairy partners and bid for the next round, but many more were either going to try to be a subcontractor or bow out, as several reached out to me off the record with their concerns.

And then there were the non-profits who were going to have to quit the program, either because they don’t or can’t work with dairy and meat or because they would now be too small to handle 40-pound box distributions.

USDA’s decision on larger boxes made some nutritional sense, but it seemed to ignore the real world (For example: Can consumers get a 40-pound box home if they don’t drive? What do they do if they don’t want part of it? How many companies can accommodate holding food at three or more temperatures to keep all products in their proper cold chain?)

And it also ignored the reality of the fresh produce supply chain, similar to what happened in round 1.

I guess we should give USDA credit for reversing their decision and allowing produce-only boxes in the program, which they released at the end of last week. I asked USDA for comments on the decision-making process but haven’t gotten a reply as of August 10.

UPDATE: USDA responded to our request August 11, and you can read about it here.

Mollie Van Lieu, United Fresh’s BB #:145458 senior director, nutrition policy, said August 10 that United Fresh leaders had been communicating with USDA that produce-only boxes should stay in the program, but she didn’t know about the program change until USDA released the information to everyone August 7.

“USDA told us if they heard it would be too difficult to implement, they would consider changing” the rules allowing produce-only boxes, she said.

Van Lieu said she’s been hearing that fresh produce has been the clear leader in the program, as consumer demand has been much stronger than other food groups in the program.

“It makes sense that they would continue to allow a produce-only component,” she said.

USDA deserves some criticism for not talking to enough current bid holders on what the changes would mean to their future with the program, as I suspect many would say they’re not able or willing to work with meat and dairy.

“I think they could have been better at collaborating,” Van Lieu agreed, “but they shifted.”

USDA shifted, and they did it quickly, but with the bid process filled with confusion now, there’s a serious risk that companies may not be able to bid, find out if they’re approved, and ramp up either with meat and dairy or produce-only, and deliver boxes by September 1.

That’s only three weeks away.

“There is concern all this can happen by September 1 and what happens during that gap” if there is one, Van Lieu said.

My advice is for USDA to find more produce industry advisors, and then listen to them.

In the fresh produce industry, even the non-profits find that “immediate, extreme changes are the norm,” as Rich Dachman, CEO of Brighter Bites told me last week.