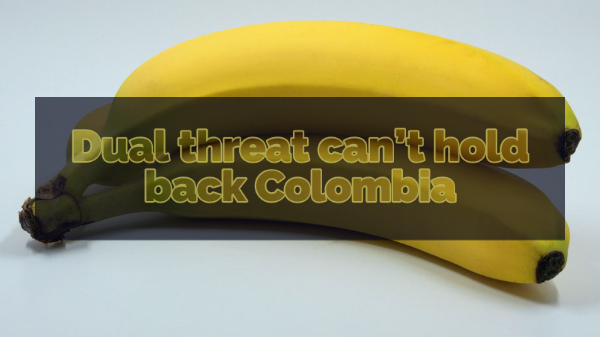 As the world’s fourth largest banana exporter, Colombia has maintained production despite threats from the coronavirus and Panama disease (R4T), as reported by Reuters.

R4T, which affects varieties such as the Cavendish and plantain, was detected last July in the northern province of La Guajira, resulting in eradication of 190 hectares.

In speaking with Reuters, Colombian Banana Growers Association President, Emerson Aguirre, said, “The banana industry is the only agricultural sector struck by two outbreaks at once. One pandemic is called fusarium tropical type 4 and the other is called coronavirus.”

More than 106,000 cases of coronavirus have been reported in Colombia, with 3,641 deaths since March. Of these cases, ten came from workers in the northeast of the country. Despite this and R4T, Aguirre states that the country has fulfilled its commercial contracts.

Colombia exported 100.3 million boxes of bananas in 2019, worth $852.8 million, reflecting a decrease of 1.2 percent and 1.8 percent respectively from the previous year. Colombia cultivates its bananas from more than 50,000 hectares with the main destinations being the European Union, the United Kingdom, and the United States.