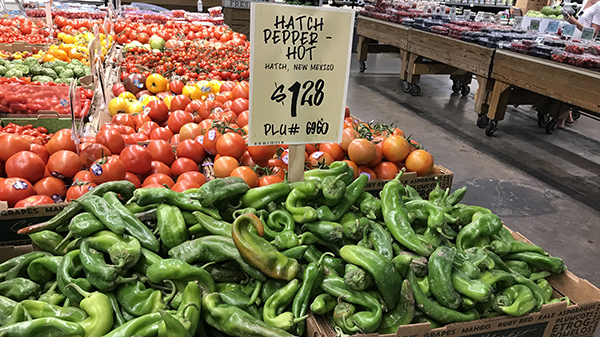 The U.S. chile industry offers a paradoxical situation: a decline in the sector that grows crops for processing, but a comparatively bright future for at least parts of the fresh market category.

In North America, Mexico is the region’s top producer; in South America, it’s Peru; and in the United States, New Mexico is the leading producer, with 77 percent of the domestic crop. California accounts for 23 percent; chiles are also grown in other states, such as Texas and Florida, according to Longino Bustillos, New Mexico state statistician for the National Agricultural Statistics Service.

“A few years ago, California was the number one producer, but they have reduced their acreage,” says Stephanie Walker, vegetable specialist for New Mexico Cooperative Extension.

The year-to-year decline is “sad but true,” Walker comments. The reasons? “Foreign companies are taking advantage of their reduced regulation and cheap, plentiful labor,” the NMCA contends.

Most chile peppers are not grown for the fresh market: they are frozen or processed for any number of products such as sauces and salsas. The fresh market accounts for a mere 25 percent of domestic chiles grown, according to Bustillos.

What accounts for the shift toward chile imports? “Mexico has huge advantages,” Walker remarks, “primarily in labor.”

Randy Bailey, owner and president of Bailey Farms, which principally grows for the fresh market, agrees: “Labor availability, labor cost, and labor regulations” are the industry’s greatest problem. “Legally speaking, farm labor is a minefield in which all growers have to tap-dance around to operate profitably. Much of it does not make common business sense.”

The situation with chile peppers resembles those for many fruits and vegetables in the United States: domestic growers are at a disadvantage with labor costs.

In the fresh market sector, the picture is brighter. Although “nationally fresh market production has gone down,” Bustillos says, “in New Mexico fresh chile production was increasing until last year, when the crop was affected by the weather.”

“I believe that the category will continue to grow as long as flavor and health benefits that these peppers offer are important to the consumers,” says Bailey. Furthermore, “spicy food has become more popular across most demographics. We expect continued growth.”

For her part, Walker is optimistic about the future of growers in the Rio Grande Valley who sell their crops on the direct market, noting that they have well established customer bases.

“Business has been great for the past 10 years, and demand for our peppers is expected to continue,” Franzoy says. “Consumers all across the country look forward to when new crop Hatch Valley pepper harvest commences. It’s a special time of year, where families buy a box of peppers to take home and roast in the backyard. It’s a tradition that started over 50 years ago.”

For some fresh market growers, then, a constant increase in demand—fueled both by increased consumer awareness and the burgeoning Hispanic population in the United States—points to bright prospects.