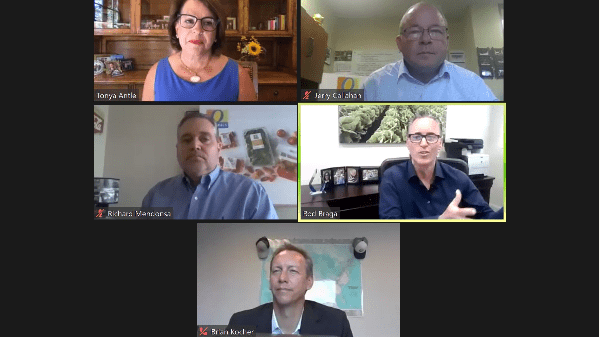 At a June 17 United Fresh Live general session, organic leaders looked at what’s causing that and what to expect in the short and long term.

“Demand has been through the roof and is still 30 to 100 percent higher than before,” said Rod Braga, President of Braga Fresh Family Farms, Josies Organics BB #:206762, Soledad, CA. “It was like Thanksgiving push, but it kept going week after week.”

Jerry Callahan, Group Vice President, Produce and Floral for Albertsons, BB #:193326 Boise, ID, said the company’s private label, O Organics, has 1,500 items, but some have done better than others during the pandemic.

He said many greens and celery have been top sellers, but also staples such as spinach, berries and bananas.

Rich Mendonsa, Vice President of Produce & Floral Procurement for Albertsons, said organics, like any item in the store, has to justify its space.

“If it didn’t sell during COVID maybe we don’t need it after COVID,” he said. “There’s only so much real estate.”
Callahan advises organic produce suppliers to concentrate on core products.

“It’s very important to continue to consistently supply product rather than introducing new items,” he said. “Consumers are telling us they’re concentrated on staples, on basics.”

Braga said he hears that from buyers, but that doesn’t mean his company will stop being creative.

“We worked on the basics too, but we have a whole team dedicated to innovation, and we don’t’ want to stop that process,” Braga said. “We have to balance and do both.”

One thing the pandemic has done is speed up the need for good technology, several panelists said.

“Online ordering from customers has been increasing tremendously,” Kocher said. “Internally, we went from one remote employee to 150-200 in two days.”

He said while he believes the face-to-face meetings are integral to the produce industry, video meetings have been successful and will continue to be.

“This business is intertwined,” Callahan said. “There will be Zoom meetings because it reduces travel and expense.”

Mendonsa said the most important technology that has to show larger adoption is the use of proper identification of organic items at the store level.

“We have to get organic through the register, so get up on UPC, PLU and GS1,” he said. “We have to show the sales of organic at retail.”

If people thought that organic food was starting to plateau before the pandemic, they should change their minds.