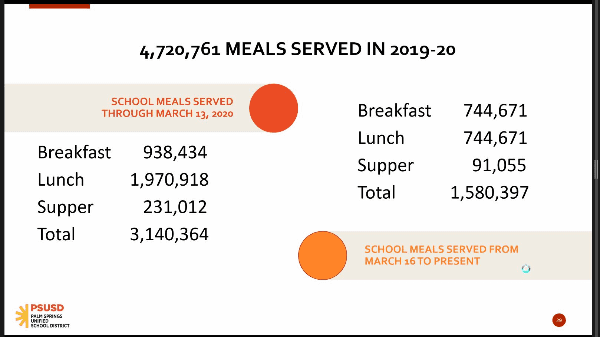 As successful as salad bars in were in schools, as a philanthropy and as a tool in raising produce consumption among school kids, they are out.

Stephanie Bruce, Director of Nutrition Services for the Palm Springs (CA) Unified School District, said salad bars are out next school year and for the foreseeable future.

But for her school district, since schools shut down in mid-March because of the pandemic, her group has been serving 160 percent of their normal amount of food.

Bruce said salad bars had been a success in her district, despite her reluctance to use them because of food safety issues.

“But we tried one and it showed me kids who have choices eat more,” she said. “It increased consumption and decreased waste.”

So, she added salad bars to all the district’s schools.

Now that COVID-19 rules prevent the use of salad bars, she’s working on ways to continue to allow students choices of fresh produce items.

Because Palm Springs is a region so tied to resorts and tourism, many people lost their jobs immediately after lockdown orders began, so the need for healthy food was strong.

That led the district to switch its school meals to its summer program model quickly in mid-March, Bruce said. The demand was enormous, so much that the district was supplying nearly twice the amount it did during school.

She said she doesn’t know what the next school year will bring, but produce companies should contact her and their local districts to see if they can supply them because fresh produce demand remains high.