Sweet onion supplies appear normal and healthy, but unfortunately, the market is anything but.

They are another crop planted for a typical year that has been upended by weak foodservice demand during the pandemic, and not enough retail demand to make up the difference.

Prices seem to have settled into a range that’s considerably lower than last year.

TOTAL VOLUME FOR ONIONS FROM MID-FEBRUARY THROUGH MAY 5TH 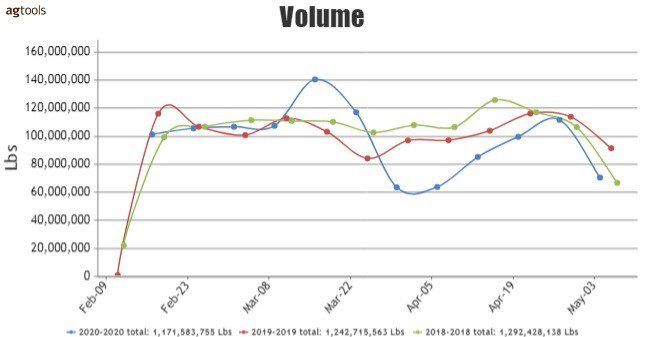 From mid-March to the first week of April, volume was abnormal compared to previous years, with a peak and a trough in the four week period, and both of which represented departures from the previous year’s pattern.

From the data we may conclude 2020 volume is starting to track the same pattern of previous years although about 5 percent lower than that of 2019 and 2018, said Raúl López, an agronomist at Agtools. 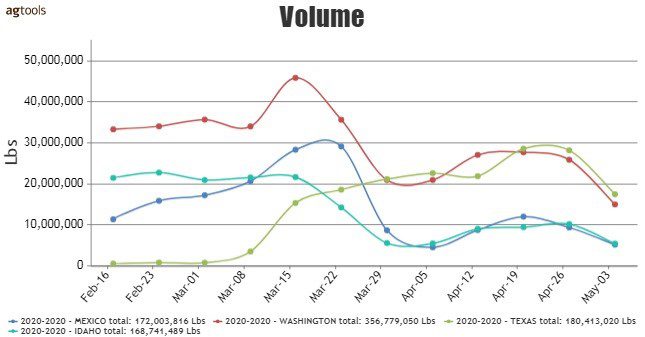 Breaking the market in the main four regions, we observe that Washington had the biggest increase in the middle of March, but fell after one week, López said. The worst contraction was for the product coming from Mexico. Less affected was the volume coming from Idaho. On the other hand, Texas has shown good production performance since early March.

Most likely as a result of the pandemic, prices started the increase during the third week in March, with a price movement from $10 per 50-pound sack to $18 sack in less than a week, López said. After the panic buying period during March, the market dropped in two weeks to its lowest price in a long time, reaching $6.50 per 50-pound sack. After three weeks, the price started recovering slowly. Today prices are $8-10 sack. Pricing appears to be settling in this price range, he said.

The demand in the Los Angeles terminal market has been decreasing slowly, López said. While they were steady in February, we noticed a small increase in late March. Throughout April, prices have been decreasing slowly but steadily, he said. This decrease is very different to how prices behaved in 2019, when prices went up to $18 per sack. The last report for 2020, shows a narrow range of $10-11 per sack which is almost the same price range as 2019.