Cabbage prices have been low the past two months, and volume has dropped significantly from its pre-St. Patrick’s Day surge.

It doesn’t appear the pandemic has had much effect on the cabbage market, and with foodservice demand low with many restaurants shut down, demand will likely stay low.

COMPARISION OF 5 YEARS FROM FEBRUARY 17TH THROUGH APRIL 19TH 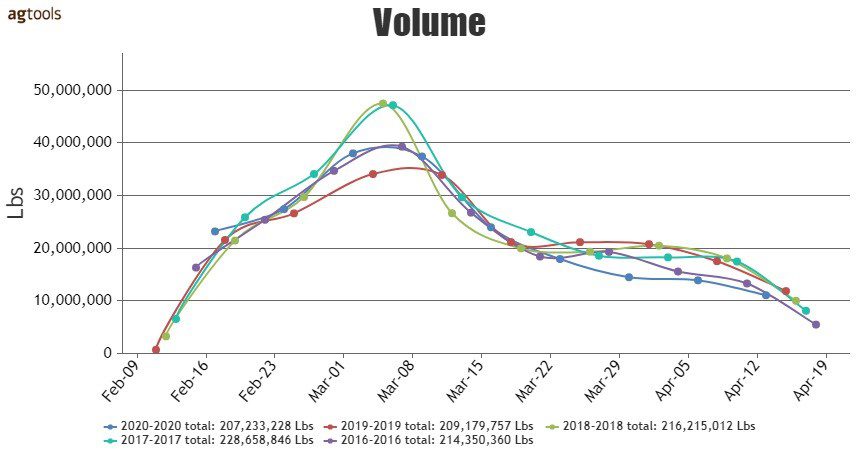 The volume pattern for the last three years has been very similar, said Raúl López, an agronomist at Agtools.

The peak during the first week of March was higher than 2018 but lower in 2019. However, after the peak volume has decreased almost daily, he said. For 2020, volume in late March and April has been lower than the previous years due to less consumer demand for the product.

Yet, total volume for the analyzed period has decreased only by 0.9 percent when compared to the 2019 season. The data shows the product has not been affected by the pandemic.

FLORIDA PRODUCTION FOR THE YEARS 2016 THROUGH 2020 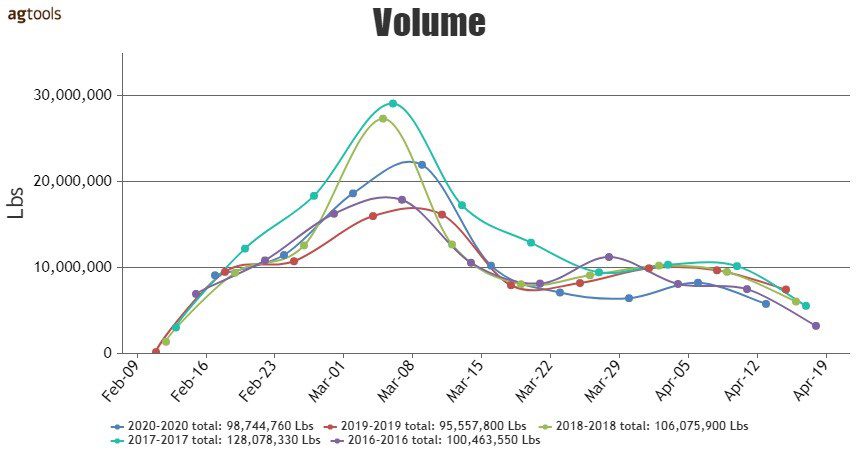 During the period, 90% of the volume came from four different regions: Florida- 48 percent, Texas- 23 percent, Arizona – 12 percent and Mexico – 7 percent.

“While Florida production may at first glance exhibit the impact of the crisis, it has followed the same pattern during the last five years, with production peaking during the first week in March only to decrease afterwards,” Lopez said.

Lopez said, with the exception of a few data points, F.O.B. prices for 2020 have been consistently the lowest of the last three years and seem not to be impacted by the global crisis. Of the last three years, 2019 prices were the highest, reaching $16 for more than three weeks in March.

In the last week of March, prices fell every year, but in 2020 the market has been especially depressed. This week’s price is only $8 has been very stable and is expected to remain unchanged this week.

Wholesale pricing does not seem to be impacted by the crisis, as they have remained consistently low since before the global pandemic. The Chicago terminal market shows the lowest prices in 2020 vs. the previous two years.