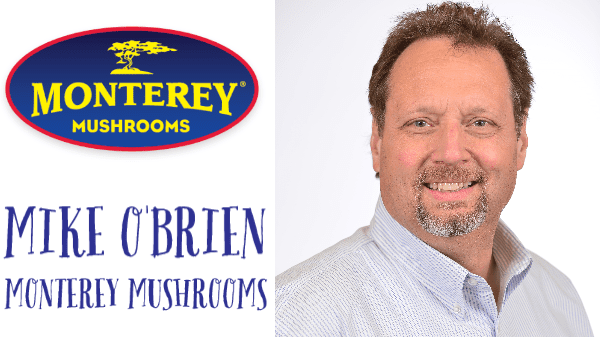 WATSONVILLE, CA | After a long career in the produce business Mike O’Brien, vice president of sales and marketing at Monterey Mushrooms, BB #:116075 is retiring to spend more time with his wife Theresa and their three grandchildren.

O’Brien joined the mushroom company in 2014 after a 42- year career with Schnuck Markets, Inc., in St. Louis where he started as a bagger and moved up from clerk to store manager and into senior leadership before holding the position as vice president of produce and floral for 14 years.

Among his career highlights, O’Brien counts receiving the Donald O. Schnuck Award for Customer Service when he was at Schnucks. At Monterey Mushrooms, he said the highlight has been learning a new industry and working with great people, especially CEO Shah Kazemi who O’Brien said is an inspirational leader.

“It’s all about people,” O’Brien said. “No matter what your job: retail, grower-shipper or volunteer. Be humble and show respect for others. Life is short and we all want to accomplish a lot. But none of us accomplish much without the help and support of others.”

O’Brien developed a reputation for excellence in sales, marketing, and consumer trends at Monterey Mushrooms. Under his tenure, the company became one of the largest grower-shippers in North America.

Kazemi said, “Mike is an authentic, strong, committed and compassionate leader who powerfully takes stands on the people and projects with which he is engaged. It’s been a joy to have him be part of our executive team and he will be greatly missed.”

His plans for retirement include volunteering in the produce industry, playing guitar, attending live music events, travel, charity work and spending time with his family.

“Brian’s unique skills and insight will enhance our efforts to accelerate Monterey Mushrooms’ growth,” Kazemi said. “We know he will be an outstanding addition to our team.”

For more information about the company, visit www.montereymushrooms.com