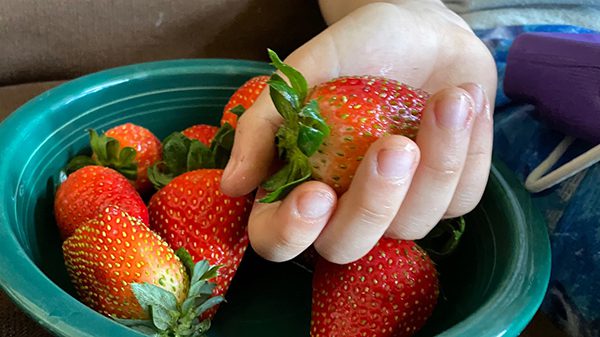 This is what work-at-home life looks like for many parents right now – kids plastered to our sides with their tablets, snacking on something. Wouldn’t you rather a child snacks on something like strawberries instead of potato chips?

I could tell we were coming up on the Dirty Dozen when I started to see more pre-release rebuttals in my inbox.

I thought surely this year with all of the turmoil in grocery and retail, the Environmental Working Group would delay it and consider the plight consumers are facing in stores right now.

But no, the annual list hit this morning as consumers are literally lined up outside their grocers, hoping food will be available.

Consumers don’t need this right now. Consumers need reassurance the food we’re eating is good for you and is safe to eat – as it has been proven time and time again. Every time this list comes out, the produce industry steps up with facts that refute its findings.

I’m sitting here with my 6-year-old who is at home from school, having just got off the phone with his kindergarten teacher. She called to check in on him and to tell him she misses him and hopes to see him soon. The coronavirus pandemic didn’t hit me emotionally until this moment.

We’re about to eat some strawberries. And we will probably eat a whole 2-pound clamshell because I know, for a fact, that he could sit here and eat 180 servings of strawberries – even at the highest pesticide residue recorded by the USDA – with no effect. I just checked using the Pesticide Residue Calculator from the Alliance for Food and Farming at SafeFruitsandVeggies.com.

But most people only read the headlines, and they won’t get past the cutesy “Dirty Dozen” alliteration. They won’t dig deeper than this convenient list.

And maybe, with stores struggling to keep up demand, maybe they won’t find organic strawberries, or maybe they’re out of work and can’t afford organic spinach, so they’ll skip it, thinking they’re making the right choice for their family because conventional spinach is somehow a “bad” choice.

But don’t take my word for it. Here are some facts from the Alliance for Food and Farming:

Furthermore, this list has a negative impact on consumption of fresh produce, especially in low income shoppers:

Right now, reassurance is what consumers need and I’m here to reassure you that washing your fresh produce is all you need to do before enjoying it. Ditch the dozen, and eat more fruits and vegetables.