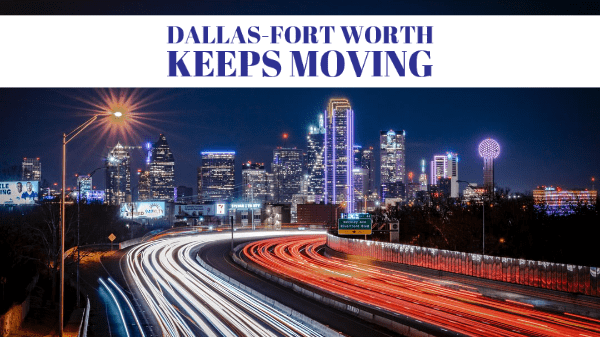 The 7.5 million residents in the Dallas-Fort Worth area need grocery stores to survive.

The dominant players are Walmart, followed by Kroger, which combined account for 43 percent of the area’s grocery spending, according to Metro Market Studies. Other leading players by store count include Tom Thumb, Target/SuperTarget, Aldi, Albertsons, Brookshire/Super 1, and Fiesta Mart. Warehouse membership stores Sam’s Club and Costco have a combined market share of 9.5 percent.

In an interview with Dallas News reporter, Oliver Wyman analyst Bobby Gibbs cited the high number of new residents moving into DFW area as making it a perfect test market. Operating costs are lower than in cities like New York and Philadelphia, and shoppers are more spread out.

All the same, the local $17.5 billion a year grocery business is brutally competitive. Walmart closed its West Wheatland store in Dallas, while Albertsons and Tom Thumb shuttered four underperforming locations in 2018. Because of declining sales, Brookshire’s closed its Denton location last summer.

Similar challenges exist in the organic sector. Natural Grocers, which currently operates 24 of its 100-percent organic produce markets in Texas, opened two new stores in the DFW area, one in Keller and the other in North Fort Worth. Even so, it has slowed store openings to improve profitability in existing stores.

“The demand for organics hasn’t really picked up that much in most areas of the country,” says Juan Ibarra, CEO and president of Marengo Foods Company, LLC, BB #:260540 in Dallas. “It seems to be more of a regional thing, heavily rooted in areas like California, the Northeast, and to a much lesser degree in Chicago.”

Standing Out
The intense competition, however, has its benefits, and one is innovation. Responding to customer demand, the Market Street supermarket chain, which operates 15 stores in the Metroplex area, now offers a tasting policy.

Store produce teams all carry utility knives, so they can cut into fruit and provide samples. The policy also applies to higher-end exotics, like dragon fruit and monk fruit, which are available for impromptu sampling.

New to the region are two Royal Blue Grocery stores, which set up shop in Dallas. One in the downtown area opened in the summer of 2018, and the other on the street level of the Trammel Crow Center in the fall of 2019. The chain is known for its convenience and prepared foods.

The ongoing growth of the Hispanic market led national retailer Albertsons to invest in El Rancho stores. Even with only 16 stores, the fresh produce-heavy chain is flourishing. A survey conducted by Rincon & Associates found El Rancho holds a 10.5 percent share of the Hispanic market, ahead of state-based H-E-B (at 8.1 percent) and Fiesta Mart (6.5 percent).

Last year, H-E-B (also known by its full name, H.E. Butt Grocery Company), headquartered in San Antonio, donated 1.5 million apples to various food banks throughout the Lone Star State, including the North Texas Food Bank in Dallas and the Tarrant Area Food Bank in Fort Worth. A dominant player in the supermarket scene, there are a few locations in North Texas, including Dallas, but none in Fort Worth (residents are hoping this will change).

For those seeking the latest iteration of the grocerant, a new Eataly is opening inside Dallas’ North Park Center Mall in 2020. The grocer, with its restaurant-in-store concept, will occupy three levels and offer tastings, classes, and an extensive array of Italian ingredients.

Lidl, the German grocer is also eyeing the area for one of its stores.

This is a multi-part feature adapted from the Texas Supplement with the March/April 2020 issue of Produce Blueprints.