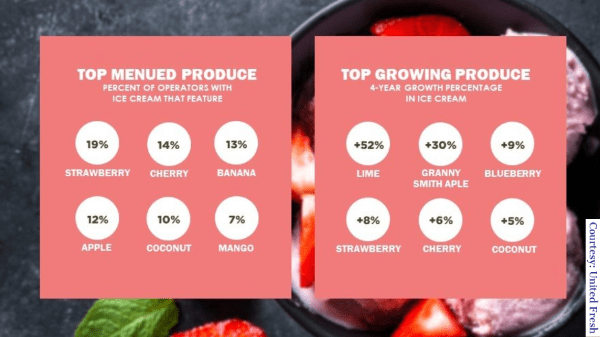 Burgers and ice cream are as American as any cuisine, and they’re as popular as ever.

Fresh produce has a complementary role in both and even starring role at times.

In the latest edition of United Fresh’s BB #:145458 Fresh Insights for Foodservice, Mike Kostyo, trendologist for Datassential, the group who produces the data for the program, said both fit in well with the Instagram food media culture.

“Burgers look great in social media,” he said in a February 27 webinar for the Winter issue.

The latest buzz for burgers has been the plant-based movement where chefs treat a veggie burger like meat, with all the interesting toppings. But chefs are also substituting other meats, such as pork, lamb and seafood, for beef.

Across the country, burgers see about 50 percent menu penetration everywhere but the Western states, where it’s 10 percentage points lower.

Surprisingly, the restaurant style with the highest menu penetration isn’t the quick-serve format but rather fine dining. Kostyo said many higher-end restaurants will have higher-quality burgers on their lunch or bar menus. Fine dining sees 59 percent menu usage compared to 36 percent for QSR and 25 percent in fast casual.

For dessert, you can’t beat ice cream, which 88 percent of Americans say they like or love.

Just like burgers, fine dining sees the highest menu penetration at 76 percent, while QSR sees the lowest at 19 percent.

Fresh fruit has long been associated with ice cream, but to push the envelope, blackberry, passion fruit and chocolate raspberry are showing up as trending ingredients, Kostyo said.

Meanwhile, the highest growing fruit associated with ice cream in the last four years are limes, which have grown 52 percent in restaurant usages over that time. Trailing limes are Granny Smith apples (30%), blueberries (9 percent), strawberries (8 percent) and cherries (6 percent).

Also, like burgers, consumers interest in healthier items has led to plant-based ice cream options, such as ice cream made from bananas.

But perhaps the most surprising item growing with ice cream is no fruit at all. It’s sweet corn.

Kostyo said March 2, “As I mentioned during the webinar, corn was actually one of the fastest-growing ice cream flavors on menus in the past year, growing 16% from 2018 to 2019. That’s faster growth than flavors like blueberry, cheesecake, and Oreo.”

“Part of why we see those gourmet, unique flavors trend so much is that ice cream is a staple on fine dining menus … but it’s also because ice cream shops across the country have gotten so much trendier when it comes to flavors.

“When you look at growing brands like Jeni’s Splendid Ice Cream, Salt & Straw, and Humphrey Slocombe, you see flavors like Hibiscus Beet, Goat Cheese with Roasted Cherry, and White Miso Apple. In fact, sweet corn ice cream was one of the original flavors that started this trend of adding more unique, often savory options to ice cream because it’s the perfect bridge: we consider it a savory flavor, but it has that very sweet flavor you associate with ice cream and dessert. Last year we even saw Cold Stone Creamery offer a Honey Cornbread Berry Pie made with honey cornbread ice cream.”