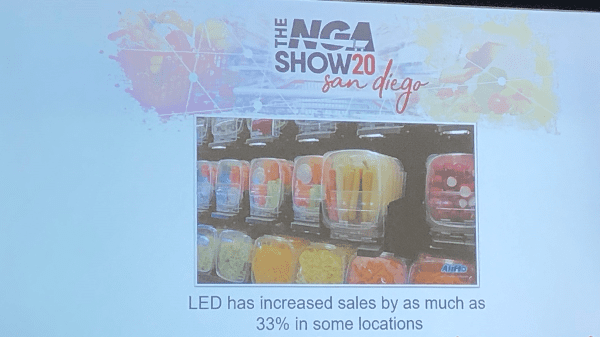 SAN DIEGO – A retailer’s decision to switch to an in-house fresh-cut produce program can be a tough one.

While the investments in equipment, food safety systems and labor vary, the pay-off can be huge.

Colleen McDonnell, expo and sponsorship sales manager for the Produce Marketing Association, BB #:153708 told attendees of a workshop at the National Grocers Association’s annual convention February 25 that fresh-cut produce now makes up 4.5 percent of retail sales, but it accounts for three times that in the department’s growth.

She said through 2019, fresh-cut fruit retail sales were twice that of vegetables, but veggies are growing at six times the rate as fruit, and 70 percent of supermarket customers buy fresh-cut produce (which includes bagged salads).

An in-house fresh-cut program says many things to consumers, McDonnell said, including that you know they value their time. It allows retailers more flexibility on pack sizes and varieties it offers.

She also said in-house fresh-cut changes the dynamic on produce department shrink. A retailer who is long on an item can cut it for specialty packs or use part of an item that would need to be culled from display, thus cutting waste.

When it comes to attracting customers to fresh-cut when they’re in the store, Jose Cartamil, regional sales manager for Carlson Airflo, a manufacturer of merchandising systems, said a retail chain recently ran a study of merchandising fresh-cut produce using LED lighting, and it found it increased sales by 33 percent using that light.

McDonnell said in addition to clear packaging that shows the product, make sure cut date and use-by dates are clear to the consumer.

“Consumers care more about when it is cut than where it is from,” she said. “You have to be transparent.”