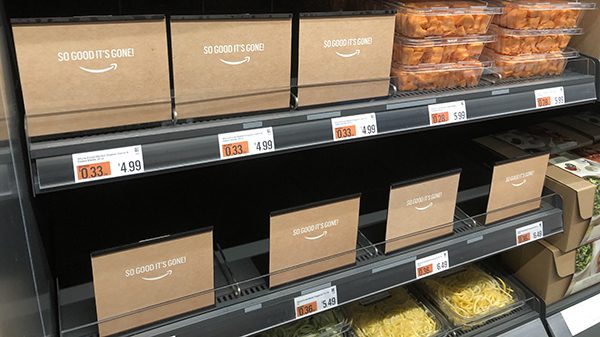 (Photo by Pamela Riemenschneider) My experiences with produce at Amazon Go have been dominated by nonsensical items for downtown office dwellers, like butternut chunks and zoodles. Oh, and massive out-of-stocks.

Add another store check to my bucket list, I guess? Seattle-based Amazon launched a pilot of its cashierless “Go” concept adapted for grocery in the Capitol Hill neighborhood this week.

Based on my experiences at its Amazon Go convenience format, however, I’m not so sure the concept is ready for a major expansion.

If you recall, I tried to be clever with my first experience with Amazon Go, about which I said “Amazon, No.” The convenience format was still in the very early stages when I saw it in October 2018 and again in February 2019.

I understand technology like this can improve in leaps and bounds over the course of a year…but is it enough?

A standard Amazon Go convenience store is small, up to about 1,500, maybe 2,000 square feet, with an extremely limited assortment. Neither store I visited in Seattle and San Francisco even carried bananas. (That’s…bananas.) They had weird things that made no sense for the office traffic they allegedly were designed to attract, at least in produce. I saw zoodles and meal kits and berries among the tubs of sliced apples, pineapple spears and prepackaged salads.

The new grocery concept is reportedly about 10,000 square feet with about 5,000 SKUs. At about 15,000 square feet, Trader Joe’s has about 4,000 items, to give you an approximate comparison. I don’t think anyone would consider a Trader Joe’s to be devoid of choices.

GeekWire did me a solid with a pretty great description of Amazon Go Grocery’s produce strategy:

“Hundreds of cameras in the ceiling overhead make up the key technological component of the just-walk-out concept, and they’re put to the biggest test in the produce section, where a variety of fruits and vegetables are available. All of these items are priced individually, such as 19-cent bananas or $1.29 grapefruits or avocados at 49 cents each, and nothing has to be weighed.”

The produce department, GeekWire says, is laid out in a way that is designed to be a familiar experience for customers. Dilip Kumar, vice president of Physical Retail & Technology for Amazon, told the organization that produce is sourced from the same growers as the company’s Whole Foods banners uses.

Reactions to Amazon’s announcement were all over the place. One analyst says this is the future of grocery and traditional retailers are lost and can’t catch up. Another says this is just Amazon’s ploy to capture customer data and there’s no way the technology is ready to scale up to a “real” supermarket size. There’s a blog or analyst with a position everywhere in between these two extremes.

Where does produce fit in?

Amazon’s fresh produce strategy over the past decade has very much been two steps forward and one (or more) steps back. Just look at AmazonFresh – rapid expansion, near-closure, and expansion again. Whole Foods continues to have growing pains following Amazon’s acquisition. I’m watching this 365 by Whole Foods Market location near my house in Cedar Park, TX, languish in some kind of dead banner limbo. It’s open, but obviously forgotten. Maybe we’ll get one of the new Amazon Grocery stores instead?

Amazon has the resources to experiment, adapt, change, and scale up, so while I may have my doubts about this particular concept’s potential to expand beyond dense urban populations, I’m not going to ignore the potential for a ripple effect across grocery.

Want to see my initial look at Amazon Go?