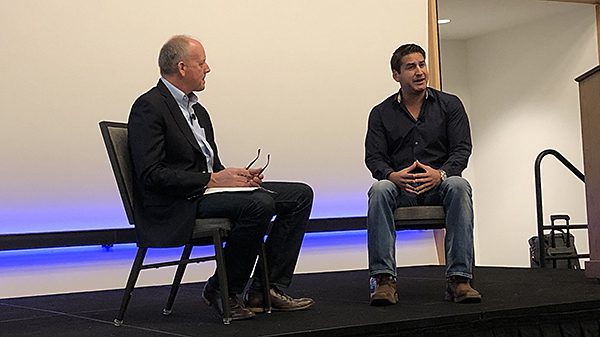 AUSTIN, TX—Over the past five years, the BrandStorm conference by the United Fresh Produce Association has hosted a number of talks about protecting a produce brand in a crisis situation.

Most of those are related to food safety.

For Gilroy, CA-based Christopher Ranch BB #:112573, the crisis management took on a whole new meaning over the past few years.

Ken Christopher, executive vice president of the family-owned company which represents about a third of domestically grown garlic in the U.S., shared his company’s story with Mark Munger, vice president of sales and marketing for 4Earth Farms BB #:148899.

It all started a few years ago, when Christopher Ranch was contacted about a documentary. They were told it was a David vs. Goliath-type narrative, and it didn’t paint the company in a good light. The company declined to participate.

It turned out the documentary was an episode of the Netflix series, “Rotten,” which accused the company of a number of atrocities involving Chinese garlic.

“We were basically framed as having a mob, cartel-like relationship with nefarious Chinese shippers with a grand scheme to take over the U.S. garlic market, ruin domestic garlic farmers and create a monopoly that will stand the test of time,” he said.

All of which were untrue, Christopher said, but that didn’t help with consumers.

Instantly, the company came under fire, and traditional crisis management efforts, like releasing a statement, weren’t putting the fire out. It wasn’t until the company started engaging with consumers directly that the story started to turn around, Christopher said.

That meant changing the contact email from marketing@ to ken@, and giving his personal cell phone number to address concerns, for example.

And it also changed the company’s approach about telling its story through traditional and social media.

“We decided if we don’t tell our own story, someone else is going to tell it for us,” he said. “Transparency is the best disinfectant.”

Humor is, too, they’ve found. The company uses the various media platforms, to reach consumers through humorous, timely narratives reacting to current events.

“We wanted to show people we’re more than just a sinister cartel,” he said. “We’re a family farm and we’re relatable.”

In traditional media, the company has used its advocacy on behalf of domestic garlic producers to flip the narrative.

“Today there’s still a 25% tariff on all garlic entering the country, and we wanted to get that narrative out there, so we started contacting the same journalists who approached us during the Netflix story,” he said. “We’re grateful that even though we could be seen as vaguely ‘Trumpy,’ at least we’re not the company that supports prison labor anymore.”

Unfortunately, that wasn’t the end to the company’s crisis management efforts.

In 2019, on the last day of the Gilroy Garlic Festival – something the Christopher family has been a leader in for decades – a gunman opened fire, killing three people and wounding 17. It was a terrible blow to the business, and the family, Christopher said. And to make it worse, the city, the festival and even the Garlic Queen are under orders by the legal team not to do any community outreach.

“And so, it kind of fell on Christopher Ranch to step up and try to be that voice,” he said.

They’ve used their video team to talk about the strength of the community, to grieve, and to find a way to heal.

The company also just formed a 501c3 organization, The Christopher Ranch Foundation, to support the Gilroy Strong message and help the festival and community recover.