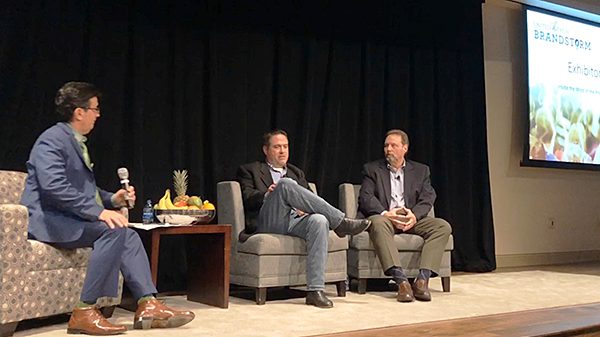 AUSTIN, TX—As an exhibitor, it can be tough to figure out what makes your booth stand out to buyers. Is it the flashy look? The giveaways? Food and drink?
Or is it the interaction?

O’Brien, who was vice president of produce and floral for Schnuck Markets BB #:105541 for many years, gave perspective as a former buyer, and an exhibitor.

The most important characteristic of a booth isn’t the flashy offerings, Lee said.

“Ask questions. You’ve got to ask questions,” he said. “When you’re just spewing information about your company, I get it because I’ve been there. Ask questions about me, my company, about my pain, about my problem that I’m trying to solve.”

Both agreed that a well organized booth, a booth staff that’s not “pouncing,” but rather engaging eye contact, makes the best first impression.

“The key is the people in the booth…eye contact,” O’Brien said. “You can’t walk by if somebody catches’ your eye. You’re automatically hooked in.”

Printed sell sheets are desirable for recall once a buyer gets back to the office, but make sure it’s not more than one. Too many creates too much clutter to carry.

“A well organized flyer with your items, where you ship from, and a contact,” are the most important information, Lee said.

What repels a buyer?

“Are the people in the booth facing the flow of traffic or are they sitting in the booth with their back to you checking their text messages?” O’Brien said. “Because that’s what’s annoying. If they’re sitting down, looking at their phone, looking like they don’t really want to be there, I could walk right by and miss something that I really needed.”

But, don’t be a badge-gawker. Just start a conversation.

The reason buyers turn their badges around are the people in the booth who are not good at engaging attendees, O’Brien said.