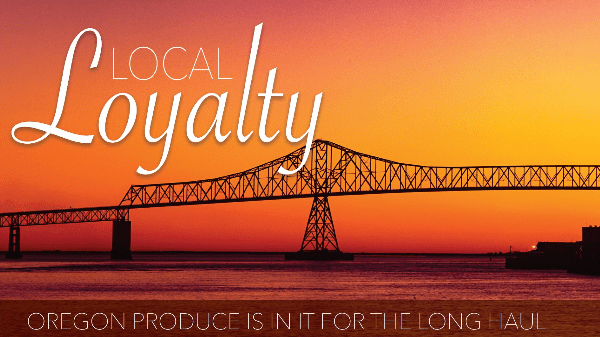 The Beaver State boasts a high number of century-old farms and has a fiercely loyal following to its local crops. Of its over 37,000 farms, covering more than 16 million acres, the vast majority are family-owned and operated.

Nationally, Oregon is powerhouse, ranked number-one for both blueberry and rhubarb production, providing 25 percent of U.S. supply for the former and 29 percent for the latter. When it comes to pears, Oregon ranked second in the nation, third in sweet cherries and cranberries, and fourth in strawberries.

Local Loyalty
Although the Beaver State has both national and global recognition for its crops, much of this bounty is bought and sold within the state.

The Oregon Farm Bureau, which celebrated its 100-year anniversary in 2019, noted not only surging interest in locally grown food, but more direct-to-consumer sales according to communications director Anne Marie Moss.

About 12 percent of the state’s farms, more than double the national rate, engage in direct-to-consumer marketing, as cited by Oregon State University figures.

“As more of our members offer farm stands, u-picks, and agritourism events, Oregon Farm Bureau established the Oregon’s Bounty farm stand guide,” explains Moss, of the searchable guide tied to Google maps that can be found on the Farm Bureau website. “The goal is to connect urbanites with local farmers.”

Paul Kern, in sales for Botsford & Goodfellow, Inc., BB #:100733 a brokerage headquartered in Portland and approaching 55 years in business, also applauds the state’s “staunchly loyal” consumers. In this region of the country, buy local isn’t just buzzwords, he says, “it’s a way of life.”

Part of the success is due to retail support. Kern says prominent point of sale displays, “featuring our products and the growers alongside them, is a very nice way to tie the consumer to the farm.”

A recent success story was the state’s tomato deal, which Caruso says “was crazy good this year” with what he considered outstanding quality. With California and Baja production “tight and high, we were able to bridge the gap with local fruit,” he says. He also touted green bell peppers as “amazing” this year.

It turns out 2019 was a particularly good year for the state’s growers and consumers. “Our beautiful Northwest summer lent itself to ideal harvest conditions,” recalls Kern, which he says created a demand exceeds supply scenario with the big three summer items—watermelon, potatoes, and corn.

This is multi-part feature adapted from the Oregon spotlight in the January/February 2020 issue of Produce Blueprints.