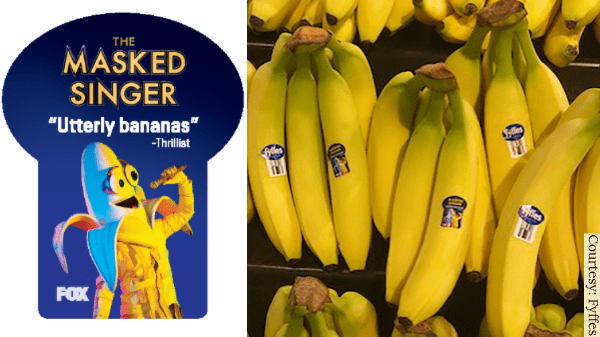 CORAL GABLES, Fla., January 20, 2020 – As the premiere of the new season of The Masked Singer quickly approaches, U.S. shoppers will notice an unfamiliar character from the viral singing competition show on Fyffes BB #:111359 bananas.

A promotional sticker featuring ‘The Banana’ – the first new costume from the upcoming season – will exclusively appear on nearly all Fyffes banana clusters starting mid-January and through February.

Season 3 of The Masked Singer premieres right after the Super Bowl on FOX and will debut six new costumes worn by disguised celebrity singers.

The Masked Singer is television’s #1 new show, captivating a massive audience of more than 17 million multi-platform viewers in its record-breaking debut.

The show features celebrities facing off against one another with one major twist: each singer performs from head to toe in an elaborate costume, complete with full face mask to conceal his or her identity. The hit singing competition series is hosted by Nick Cannon and features panelists Jenny McCarthy, Nicole Scherzinger, Ken Jeong and Robin Thicke.

“Fyffes is thrilled to partner with FOX to introduce the new costume on our bananas,” said Marion Tabard, Vice President of Marketing for Fyffes in North America.

“It’s a natural fit for Fyffes to feature ‘The Banana’. We aim to catch the attention of produce shoppers and build excitement for the return of The Masked Singer,” said Tabard.

Fyffes collaborated with Encompass Media Group and The Fruit Label Company for this promotion.

“We are very excited to see this banana sticker campaign and the season 3 premiere of The Masked Singer come to life on stage, following television’s largest live event,” said Dale Foshee’, Managing Partner of The Fruit Label Company.

About Fyffes
Fyffes is one of the largest and oldest tropical produce importers and distributors. With an infrastructure that reaches across the globe, Fyffes is truly an international player, involved in the production, procurement, shipping, ripening, distribution and marketing of bananas, pineapples, melons and more recently mushrooms. Since 1888, Fyffes has been committed to bringing the world the highest quality products, inspiring people to feel excitement about our brands and making a positive difference for our growers and farmers, our customers and the environment. Today, Fyffes is the largest importer of bananas in Europe and the No. 1 importer of off-shore melons in North America. In addition to tropical fruit, Fyffes is the third largest producer of mushrooms in North America. Discover more at Fyffes.com.