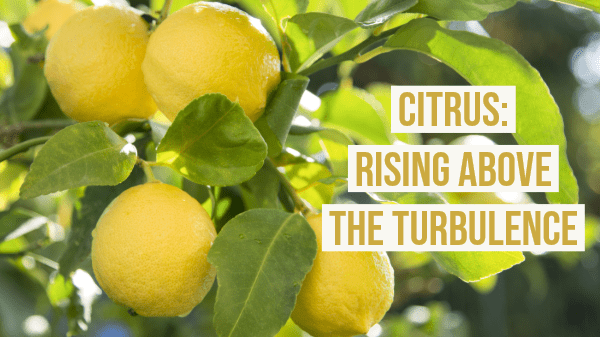 Every agricultural commodity has to face two perennial challenges: pests and trade issues. Sometimes these problems are mild, but they never entirely go away. Over recent years, the citrus industry has been hit in both areas.

In regard to the pest problem, notably citrus greening or HLB, growers have seen some real progress after a difficult decade. With trade, much remains to be done.

Yellow Dragon Disease
To look at the current state of the industry, let’s start with pests and disease problems. Over the last ten years, the citrus industry, especially in Florida, has been hard hit by a disease known as huanglongbing or HLB.

Florida calls it citrus greening (a term not used in California). Huanglongbing means “yellow dragon disease.” It’s a variant of the original huanglengbing, which means “yellow shoot disease” in a Chinese dialect. The disease is caused by the bacillus Candidatus liberibacter. It’s spread by an insect called the Asian citrus psyllid, which injects the bacterium into the tree’s phloem.

The disease was first discovered in 1919 in China’s Guangdong province.

“As the fruits begin to mature, instead of signaling their ripened state by turning yellow or orange from the bottom up, the color change often starts at the top, where the fruits attach to the stem.”

Since then, the disease has been found in seven of the top ten citrus-producing nations on earth.

To kill the insect that is the disease’s vector, growers have used chemical insecticides. In addition, Koppert Biological Systems in São Paulo, Brazil, is promoting the bioinsecticide Challenger for managing the Asian citrus psyllid.

Challenger contains a fungus, Isaria fumosorosea, that acts as a parasite to the psyllids, eventually killing them. Although research indicates the product is almost as effective at eliminating psyllids as chemicals, it has only begun to be applied on a wide scale in Brazil. Some Florida growers have taken to spraying orchards with antibiotics, although this raises concerns about antibiotic resistance.

Nonetheless, the industry has made significant progress. One bright spot is a disease-resistant mandarin variety known as Sugar Belle, able to grow new phloem after being infected.

Researchers are studying phloem regeneration in other varieties. Another piece of hope comes from Washington State University, where researchers announced in September that they were able to cultivate the bacterium in a lab. Previously this was impossible. Lab culture of the pathogen will make it much easier for scientists to study.

To this day, there remains no cure for citrus greening, but growers have fought back with an array of management techniques. Because HLB harms trees by impeding nutrient uptake, one part of the solution has been better and more precise application of micronutrients.

“We’ve got growers out there that are giving them much more than the standard NPK fertilizer,” observes Andrew Meadows, director of communications for Florida Citrus Mutual, BB #:163418 Bartow, FL.

Michael Rogers, director of the Citrus Education and Research Center at the University of Florida, agrees: “It really comes down to spoon-feeding the right nutrients.”

Better water management and alleviating stress on diseased trees are other important elements. “Root health is extremely important,” Meadows adds. “Adjusting the pH in the water can have a profound effect on root health.”

Over the last two years, the Florida citrus industry has had to fight back, not only against greening, but citrus canker, which remains a problem in some areas.

A new pest, the lebbeck mealybug, has also arrived. In areas where it occurs, such as Africa and the Mediterranean, it can cause a fruit loss of 50 percent. Researchers are currently looking for a means of control.

These difficulties were augmented by Hurricane Irma in September 2017 (which damaged or destroyed an estimated 420,000 acres), but the industry is clawing its way back. In July, the state announced it had approved over $100 million in emergency relief for citrus growers. In 2018-19, orange production was almost 60 percent higher than in the previous season.

In California, HLB is still confined to backyard trees in the southern part of the state, but the industry is keeping a careful eye on it with monitoring and public information programs. In Texas, over two dozen counties have been placed under quarantine for HLB, the most recent being Galveston and Brazoria counties, which were placed under quarantine in October.