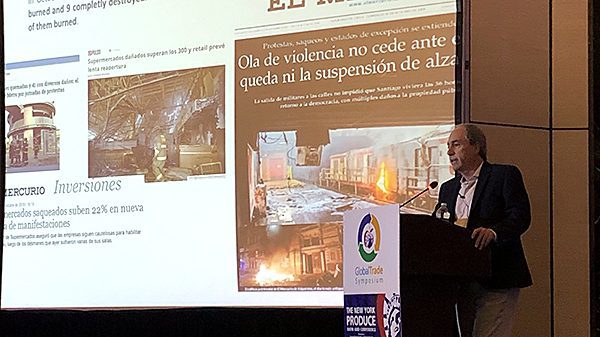 Chile has been a key produce exporter for many years, and the U.S. is its top export market, so the market uncertainty has been closely watched.

“The unrest hasn’t affected farms or ports, and we maybe even benefitted from the unrest,” he said at the Global Trade Symposium, December 11, as part of the 10th annual New York Produce Show.

He said on October 18, 77 metro stations were damaged with 20 burned, and 335 supermarkets were looted with 31 burned. Then a week later, more than one million people peacefully marched for government changes.

Alcaino said the protests could have led to more violent clashes, but the government and president Sebastian Piñera did not fight back but pledged peace and even agreed to change the constitution to address some of the concerns.

“This creates the opportunity for agreement on the future of Chile,” Alcaino said.

He said the biggest issue for the protesters is the economic inequality in the country. While Chile seems to be a wealthy nation, and has had the strongest economy in Latin America, the wealthiest 5 percent of the country control 51 percent of the nation’s wealth.

“There are also feelings that corruption is getting worse and consumer costs keep rising,” he said.

But the protests aren’t all innocent. Alcaino said violent anarchists and leftists are pushing students and labor groups toward violence. And after human rights groups criticized some early police abuses to crack down on protests, protesters realized no more resistance emboldened them.

Another speaker at the conference, John Pandol, director of special projects for Pandol Bros. BB #:111977 Delano, CA, said the violent protests are being led by international anarchists without Chile’s interests in mind.

Nonetheless, U.S. buyers shouldn’t see any decrease in winter fruit supplies from Chile as a result of the unrest, unless it gets worse.