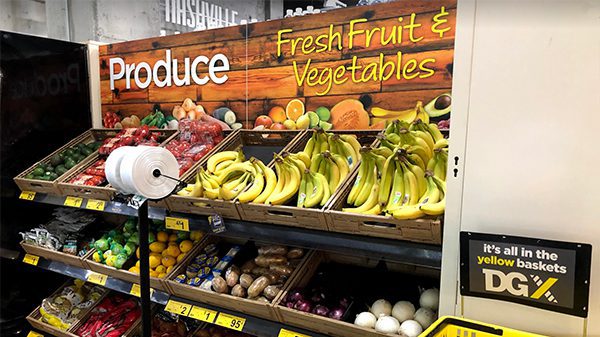 Of those new stores and remodeled locations, fresh produce will be added to about 250, said CEO Todd Vasos, during the company’s third quarter earnings call on December 5.

The Goodlettsville, TN-based company is on track to have fresh produce in about 850 stores by the end of 2020. Fresh produce, and fresh food, bring a significant boost to remodeled stores, Vasos said.

“Our traditional remodel stores, which average 22 cooler doors, deliver a 4 to 5% comp lift on average,” he said. “This compares to an average comp lift of 10% to 15% for a DGTP or DGP remodel, which has an average of 34 higher capacity cooler doors.”

The strong performance prompted Dollar General to ramp up the pace of its remodel plans by 50% in 2020.

“Investing in our mature store base to incorporate our best and most impactful initiatives is an important component of our real estate strategy,” he said.

The company also plans to accelerate the rollout of its DGX small format in 2020, with 20 additional stores, bringing the total to 30 by the end of the year.

Executives also were pleased with DG Fresh, an effort to shift to self-distribution for frozen and refrigerated goods such as dairy and frozen. The company is currently self-distributing to nearly 5,000 stores with plans to expand to 5,500 stores by the end of 2019.

While DG Fresh does not currently include fresh produce, Vasos has indicated previously that the effort could be a path in that direction. A fifth warehouse is coming online currently, with more planned in 2020.