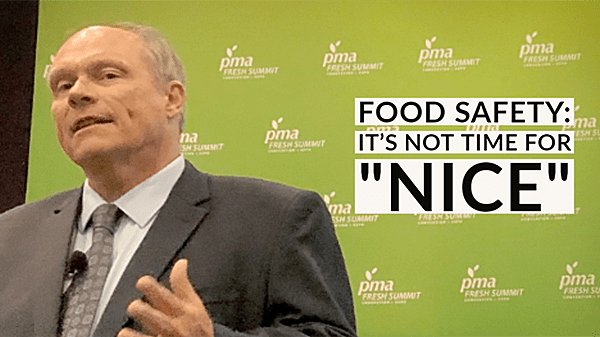 ANAHEIM, CA – Produce and retail industry leaders have generally agreed not to compete with each other on food safety.

Both in times of outbreaks and calm times, companies have been encouraged to share food safety knowledge and break throughs.

But there are still outbreaks and missteps.

Bob Whitaker, Chief Science and Technology Officer for the Produce Marketing Association, BB #:153708 said it may be time for a change in food safety.

“We don’t compete on food safety,” he said during a food safety workshop October 17 at PMA Fresh Summit. “To hell with that. Do it. Compete on it if that will make us better.”

He prefaced his presentation by saying he may say some things that make attendees uncomfortable, but that’s necessary to produce safer fruits and vegetables.

“Food safety is about building, about getting better,” he said.

As he winds down his career in produce safety with his retirement in January, Whitaker shared some things he’s learned.

“The most important thing the industry can do for food safety is to adopt end-to-end traceability,” he said. “I can track my grandson’s wagon that we ordered on Amazon, but not my food.”

He said the Food and Drug Administration has shown that it’s not shy when it comes to consumer advisories, such as the one on romaine lettuce last Thanksgiving.

“Without traceability, this will be the norm,” he said.

But his talk wasn’t all about the industry’s shortcomings.

Whitaker said he was proud of his and the industry’s work with the Center for Produce Safety BB #:339618.

“It’s a new paradigm, a private/public partnership,” he said, that has had funding from produce companies and organizations which have been matched with government funds.

He said the group is funding important research, but the industry must follow it.

“We have an outbreak and people say, ‘We need more research.’ No. We need to find out why it happened first” and then change practices.

Whitaker said he’ll miss the industry, and the feeling is mutual.